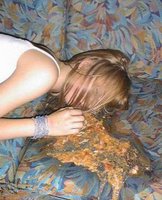 It is so un-freaking-believable.

My sane brain cannot fathom how immature these undergrad college kids can be.

I was in my TA class this afternoon. We had the second quiz. My day just went downhill from that time on.

The quiz is held at the beginning of the class. So we passed the papers, and watched over them. After about ten minutes, papers begin to be handed back. And at the same time, some fair number of people hand their papers back, pick up their bags, and leave the room. Ok. The class is an hour long, but they decide to take the quiz, then leave immediately. After the quiz, there was this big void in the middle of the auditorium.

Can't they be more discreet? Come to think that there are four TAs and a professor roaming the room, they still have the guts to parade out the room like that?

It doesn't end there. Once we got all the papers, we sort them out alphabetically and divide them among the graders. And voila! We find names like [Shithead Focker] and other made-up names. Funny thing is, they include the person number as well!

Obviously, they don't want to take credit for their work. They scored average, but since there is no name, we are not recording it. I know that all they want is one thing: attention.

When I applied as a graduate student, I know that I would have teaching responsibilities. I never signed up for baby-sitting duties.

After today, somehow, the idea of having one's own small 40-seater class next year isn't so scary after all. After all, it is a small number, and people are less prone to make an ass of themselves in small crowds.