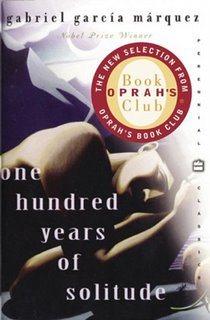 Ah! Spring has finally arrived! Today, it was so warm I decided to go to school without wearing my coat. I only had my leather jacket. And it was perfect!

The snow is melting, the trees are budding, the sky is clearing...

I also finished the book I was reading before, Botchan. It was a short yet fun read. Now, I picked One Hundred Years of Solitude by Gabriel García Márquez.
Everyone seems to have read this, so I might as well read it.

This afternoon, I watched the second episode of The Amazing Race. My download has finished, and since I had some free time, I decided to watch it.

Some commentaries: I am glad that the team that was eliminated today was the team that I thought was going to be eliminated. They just don't have what it takes to race around the world and win a million dollars. On the other hand, I am somehow irritated at the show because they include contestants that are rather weak, such as elderly couples. Although I am not trying to say that I am partial, I think it would just be unfair for the other teams that are stronger to have a weak contestant. There is just less competition.

Anyway, I am not the producer of that show, and still, I like watching it, so what can I do?