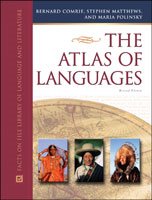 Monday, oh Monday. I went to my office today, because I had an appointment with my landlord. Or rather, my landlord's son. My situation with my new landlord reminds me of a Biblical illustration of the rich man, his son, and the workers, where the workers kill the rich man's son. I am not suggesting that here though, I am merely alluding to the fact that I as the tenant deal with the landlord through his son.

Anyway, so yes, I had an appointment with him, because I would receive the lease agreement signed, which I did. I also received the key to the apartment. That would be the key that I would use when I arrive in August. Yay!

I also received my desk copy for my textbook. It is the book that you see on the upper right corner. It is after all, an atlas, so that means that I would have to put forth plenty of work to supplement it, and to make a meaty class out of it. 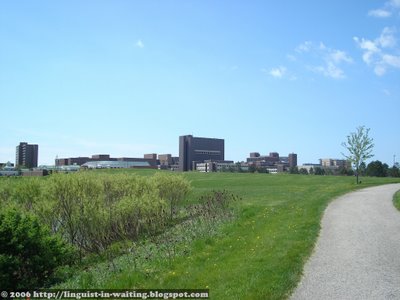 I thought I'd share another batch of photos with you. This is a shot of the North Campus, from the path that follows along Lake Lasalle. From the left, you see The Commons, which is the campus mall, where we have Subway, Burger King, a Korean restaurant, a Chinese restaurant, Sbarro, Starbucks, a convenience store, a salon, and other shops; then you see the tall Capen Hall; then the wide beige-colored building, which is the Student Union; and behind those are the brick buildings of Baldy Hall and O'Brian Hall; then another tall building, which is Furnas Hall; plus plenty of other buildings in between, and in the far right, the cream-colored building is the Natural Science Centre. 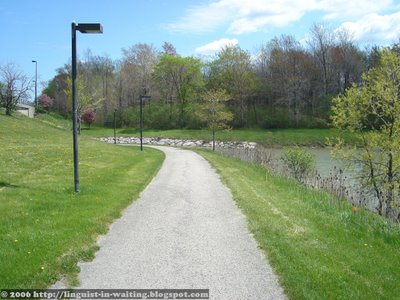 This is the path that leads to the walkway under the bridge, so one can cross over to the Ellicott Complex, the dormitory halls that I described a post earlier. 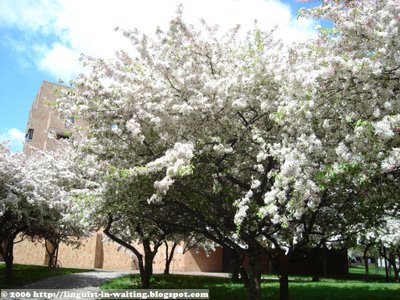 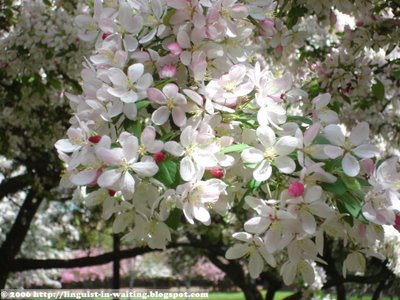 And these are the flowers that bloom on the trees. Are they cherry trees? I don't know, but they are very similar to the cherry blossoms that I see in Osaka during spring, the ones that only bloom for two weeks and then they wither and fall.

I am already packing my stuff, due to the fact that I only have four days left here in my current apartment. I already segregated and filed the documents and other papers that are important, such as my payslips, my bank statements, and other things that I would leave here in the trust of my friend. I also have the textbook and a couple of dissertations that I will be bringing in preparation for my class next semester. And I have also segregated my clothes: the clothes that I would bring on the new suitcase, and the clothes that I would store on the old suitcase.

One week left, and Prague, here I come...