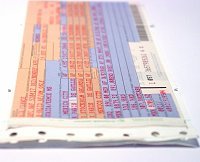 I don't have a special topic to blog about today. Rather, I have a collection of small vignettes, small thoughts that I thought I'd upload here.

First off, I reconfirmed my flight reservations with JetBlue Airways (which would take care of my Buffalo-New York City leg) and Swiss International Air Lines (which would take care of my New York City-Prague via Zurich leg). FYI, JetBlue only took about 1.5 minutes of waiting in the phone to be answered. On the other hand, Swiss took about 5 minutes of waiting before a representative answered my call. I already confirmed my seat assignment in all legs of my trip.

By the way, did you know that the phone somewhat blurs your speech? When I was dictating my confirmation number to the JetBlue representative, he mistook my F for an S. I can tell you though, that both are fricatives, the only difference is their placement. The F is produced using the lips and the teeth, while the S is produced using the alveolar ridge. That's why the F is called an "labiodental fricative" while the S is an "alveolar fricative".

Next topic. Last night, I received an email from the editor of the journal that will publish my paper. Apparently, after sending my revised version of the paper, one of the not-so-anonymous reviewers had additional comments. But this time, the comments are fewer than the previous one. So I need to fix that too, and my deadline is the end of May. Ah, the joys and pains of peer-reviewed publishing. At least this system ensures that the quality of the publication is excellent. One must satisfy and convince a few experts in the field in order for one's work to be published. No wonder they say that the making of many books is a pain in the butt.

On to the next topic. I already took off my quilt, and washed its cover. So tonight I will be sleeping quiltless. My quilt will then be folded and packed into the suitcase that I will not be bringing, together with my winter clothes and other stuff that I won't need. I also need to buy an extra box because I need some container to store my stuff.

I cleaned the toilet and the bathtub today, and yesterday I cleaned the kitchen range. They are both sparkling clean now. The only thing I hate about it is that my roommate would use it, thinking it is magic that it suddenly became clean. Especially his toilet bowl. I don't use the one on the second floor, he uses it, while I use the one on the first floor. But still, I cleaned the one on the second floor, because I have a subletter that will come. It would be embarassing for me if he sees that. With all that growth of mold in there, in which my roommate doesn't even know how to take care of. Well, enough of that.

I already packed my printer, my webcam, my rice cooker, my spices, my winter boots, etc. I am ready to go. I bought packing tape yesterday and I was taping my way around the apartment.

Yesterday, when I took my photograph, I needed to ride the subway to go to the studio. And there was one disturbing scene that I saw. In the subway, there was a quite obese lady dressed in office attire eating. She was munching away on some cupcake, and I could just see how her mouth muscles, or rather, fat cells, go up and down, devouring that cupcake. She had a bag of those. No wonder she was fat. If you want to imagine how her mouth fat cells moved, then do this. Take your hands, palm facing your way. Then close and open it in medium speed. That is how her cheeks looked. Opening and closing, chewing that cupcake. Anyway, we got off at the same station, and I was the first one to board the escalator. She happened to be behind me, when suddenly:

I then instead of just standing there, I walked up and climbed the escalator. How weird was that? She was eating, she was obese, and it doesn't look like she is lacking anything. And then she comes to me asking for a dollar? No way man, there are other people lacking than you.