First things first: due to the fact that my stay here in Prague isn't so short, I changed the Weatherboy and the Time Zone to reflect my current location. So don't be surprised if the previous posts have weird time stamps on them.

Now, for a taste of vicarious tourism.

So for today, I'll post the pictures of Obecní Dům and Prašná Brána.

Obecní Dům, or the Municipal House, is grand building in the center of Prague. Notice the Art Noveau facade of this building, where plenty of concerts, shows, opera, and other performances are held. The design of the building has a sensual feel to it, and it reminds you of a Victorian Easter egg, at least, that's what Lonely Planet says. 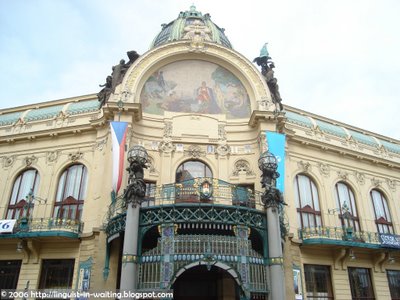 This is a close-up of the painting on the very center of the facade. 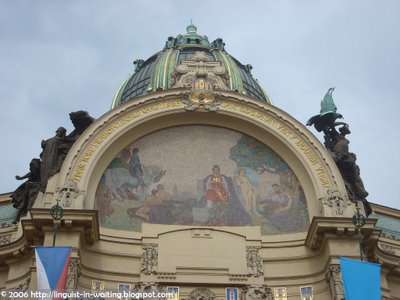 Now this is a shot of the interior. 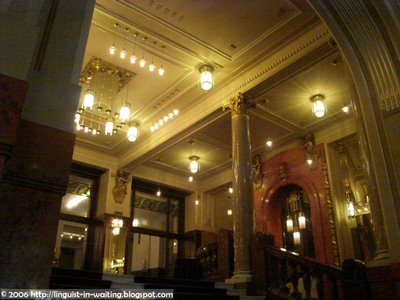 This building has plenty of beige and red marble, which is used on the staircase and the pillars. If one climbs up the stairs, then one would enter the main concert hall. However, access to that is closed to the public. The only time one climbs those is if one would attend a performance that night. Yesterday night's show happened to be a Gershwin and Mozart show, but we had conflicting schedules so we didn't buy a ticket.

By the way, look for the costumed ticket vendors that stand on the entrance to the Obecní Dům. They are dressed like they were living in Mozart's era.

After that, we went to the Prašná Brána, or the Powder Gate. This is just next door to the Obecní Dům. The Prašná Brána is a dark imposing structure where cars can pass underneath it. Beware of the people who approach foreigners and ask you whether you'd like to have your money changed. Do not fall for this, for they will lead you to a dark alley and declare a stick-up. If you want your money changed, do it at a permanent establishment, not with a guy lurking in tourist spots. 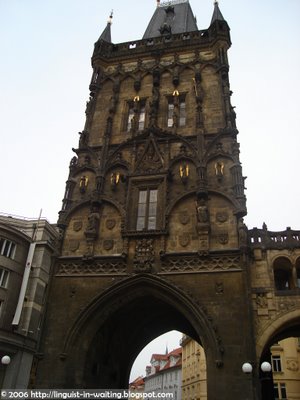 This is the Prašná Brána. It has three levels above ground, reachable by a winding staircase that is located between the Municipal Hall and the Powder Gate. 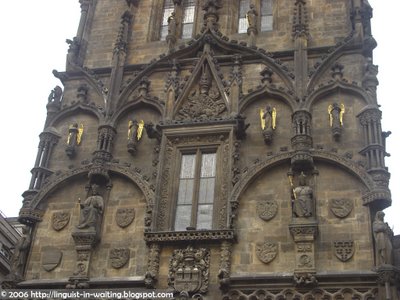 It is fairly dark, due to the age. It was built in 1475 and was one of the original gates of Staré Město, or Old Town. 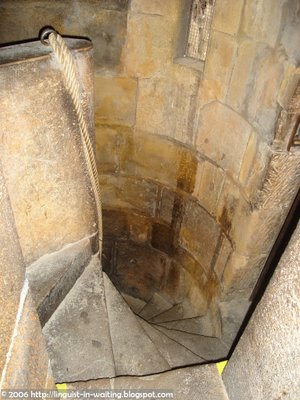 This is the winding staircase that one would climb in order to reach the different levels within the Gate. Notice the rope that is located in the middle of the staircase. One needs to hold on to the rope because the bricks have become slippery with age. And the steps are steep as well.

There are plenty of statues within the walls of the Gate. One thing that I have noticed is that most of the statues depict women. These are just a few of them. Forgive the halo-like quality of the picture, because there are lights underneath the statues and a close-up of these result in the foglike appearance. 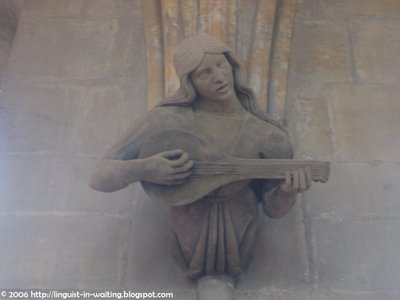 This is the statue of a woman with her lute, playing a tune. 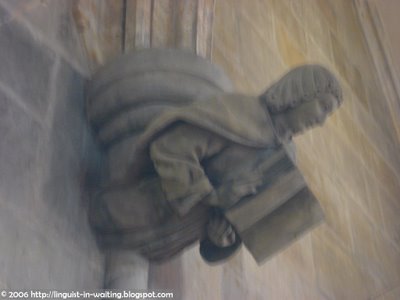 This on the other hand is a statue of a woman with a book, perhaps a religious article. 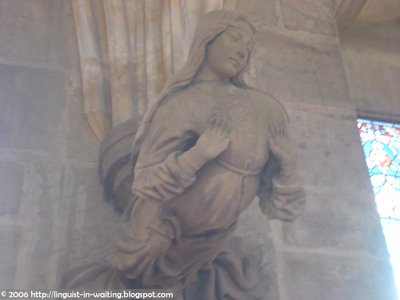 And this is a statue of a woman that is engaged in self-stimulation. Well, morality didn't seem to have changed from 1475 to today.

The first level had exhibitions that pertain to the Powder Gate. The second level on the other hand had exhibitions of the city of Prague, and its religious and secular spires. It also had photos of the different spires of the city. No wonder one of Prague's nicknames is "City of a Thousand Spires".

The third level is the highest one, and it is a wooden structure, as evidenced by the following photos. 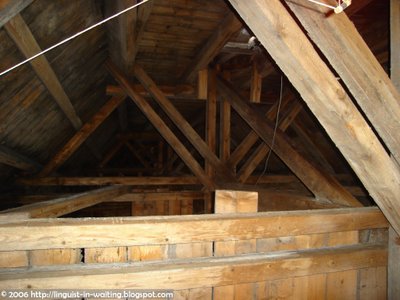 One can climb up this plank and reach the very top of the Gate. However, it is not accessible for tourists. 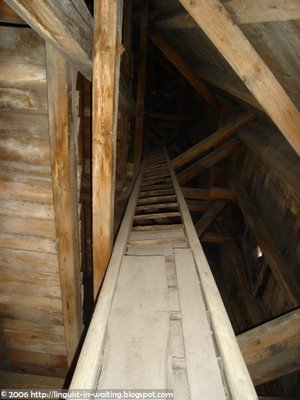 Prašná Brána gives you a splendid view of the city. These are taken from the different sides of the Gate. 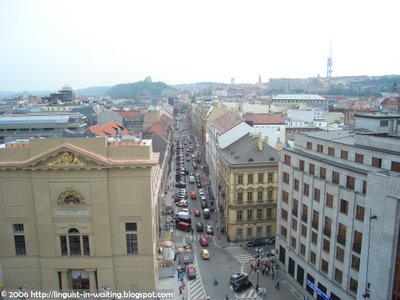 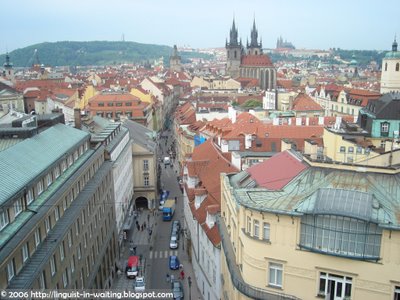 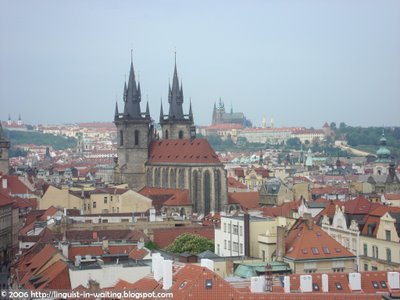 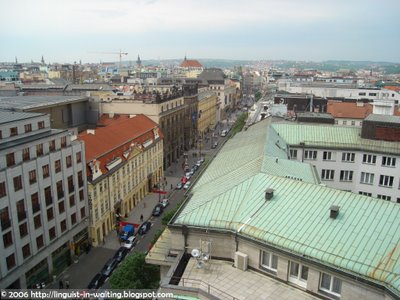 Finally, it is time to go down again. One will descend thru this winding staircase again. 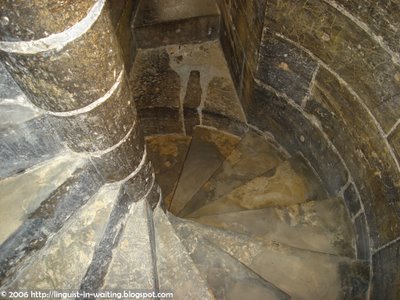 When you reach the first level, there is a rather straight staircase, but nothing compared to the spiral staircase. 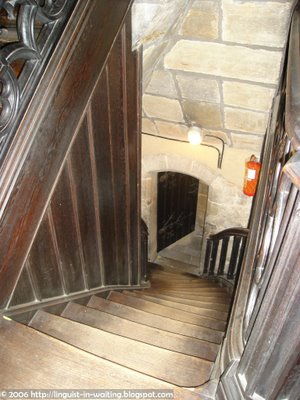 Finally, one will exit through this door and then one will find oneself facing the street of Celetna again. 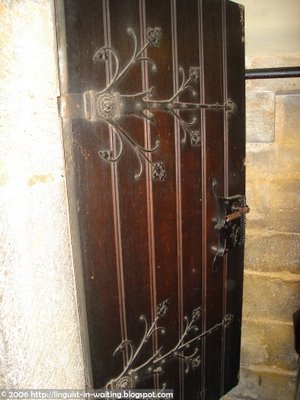 For the Obecní Dům, entrance is free, unless one would like to watch a performance, and so the price depends on the show you would watch. Prašná Brána on the other hand costs 50 Kč for adults and 40 Kč for children and students. Good thing I had my UB Card with me.