Today I went to my office again, around 10:30 in the morning. I decided that I store some of my stuff in my office, such as a couple of books that I personally bought and not just borrowed from the library. I have two of those books, Naked Lunch and Foucault's Pendulum. So I brought them to my office and shelved it in one of the numerous shelves that I have.

When I arrived, I saw Captain Hook, aka the officemate who has a very sensitive ear. He was there, just finishing his papers. We had the idea that we wanted to shift the furniture in the office, to make it a bit spacey. So that we did. We also exchanged tables. So now, instead of having this table, which was a bit small, I now have this! 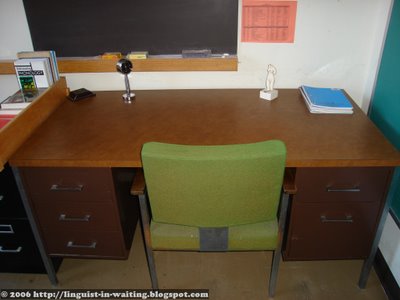 It is bigger and wider. My old table now became Captain Hook's table. But he won't be using that table for long, because he will be moving into a different office. It all concerns what we teach and what program we are. Since he will be teaching in a different program now, his office would be different. Oh well, it's nice having Captain Hook in the room. Aside from the burglary incident, everything was fine with the two of us. This move suggests that there is a new person that will occupy the office in place of him. A new person that is like me, funded by the university. Who might that be?

Anyway, so after the moving, the room looked like this. 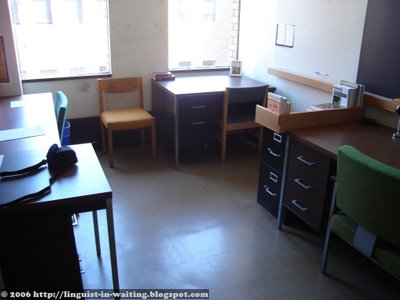 I was standing outside the door when I took this photo. There are three tables for three people. These are the tables where there are chairs facing them. My table is the one closest to the door, with the green chair. My old table, the small one, is now facing the window. That is Captain Hook's table until August, when the new semester begins and he shifts programs. The third table facing to the left is the table of my other officemate. The small table where my digital camera bag is on is just an auxiliary table.

The room's arrangement used to be that my small ex-table and Captain Hook's ex-table are aligned against the wall, next to each other. But it looked cramped, especially when there is a student that would consult with us. Now, there is a seat against the window, where a student can sit while talking to any three of us. The only thing I don't like with this arrangement is that one member would have his back to the door. So when Captain Hook suggested this layout, I objected against being the one to take the table facing the window. But he doesn't mind, so he gets that table for now.

After arranging the office, I went out and took plenty of pictures of the University at Buffalo's scenery. Did you know that we have a lake within our campus? I took pictures of them, plus the dating spots that undergrads frequent at night. I will try to post them sometime soon.

So as I was walking to the lake, I passed by the building where my class for next semester is located. I actually found the room I will be using. Here is a shot of the room. 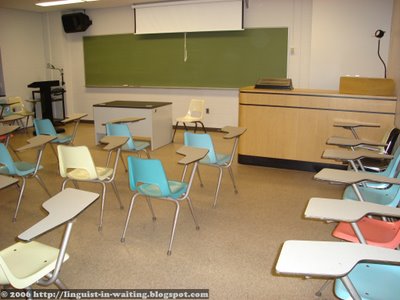 As you can see, it is a Tech Room. A room equipped with technological equipment. See that Control Box on the right? That is where all the projectors, DVD players, computers, cassette players, you name it, is stored. That means I would get a combination so I could open the lock to that. That also means that I might attend a seminar sometime in August that would orient me on how to operate these stuff. Great room. The only thing I don't like is that it is a considerable distance from my office. Oh, one cannot have everything eh?