What do you do if you find yourself one morning in Zurich Airport and you realize that there is a wireless LAN portal, and you have two hours to burn before your next flight? Yes! You blog!

So far, my trip has been smooth. Very relazing rather. I find it funny to see other people making a big fuss over nothing, panicking, and all the other interesting behavior by other people from all over the world. Anyway, I am on batteries now so I'll make it brief, but I promise to write a concise trip report later when I get to Prague.

Maybe, it was because of the two beers in my system that the photo below looks like this. Or perhaps that was how my optical perception worked. 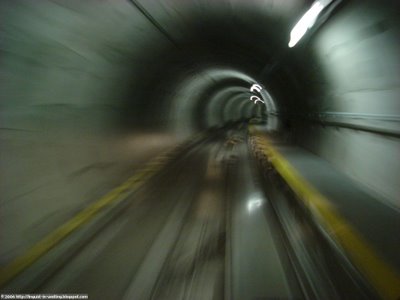 This photo is actually a photo of the tunnel between Terminal E and the Airside Center in Zurich. I was in the very end of the train, and took that one as the train sped by.

So, till then, I'll see you all in Prague.