The Staroměstská Radnice or Old Town Hall is located in the northern side of Staroměstské Náměstí (Old Town Square). It is founded in 1338 and looks like a row of private buildings with a tower at the end; Lonely Planet says that the reason for this is because it was gradually assembled from existing buildings by a medieval town council that was short of funds. 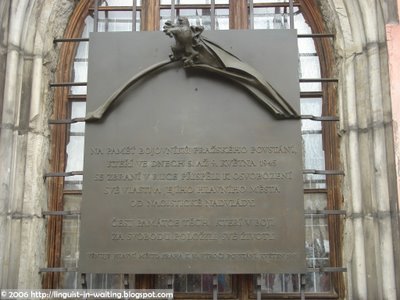 This is a plaque commemorating the victory of the Red Army and Czechoslovak units at Dukla Pass in Slovakia in World War II. This plaque can be found on the tower's wall facing the square. 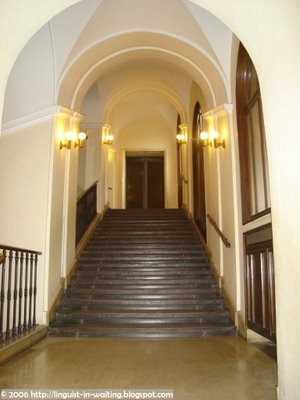 This is the staircase that one must climb if one would like to visit the tower or the interior. There is also an elevator that can be used for visitors that are a little ibt short of energy. 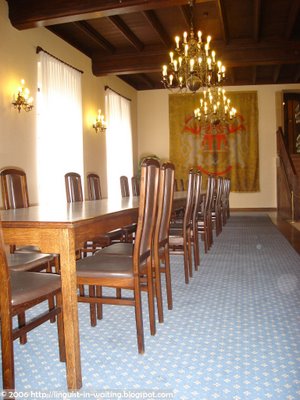 We bought tickets for the guided tour of the interior. One cannot visit the interior of the tower without a guide, so we had a taste of guided touring in the Old Town Hall. This picture at first sight looked like a long dining table, but in actuality, this is where the meetings of the town council used to be held. The tapestry at the very end of the room is one of the symbols of the city. 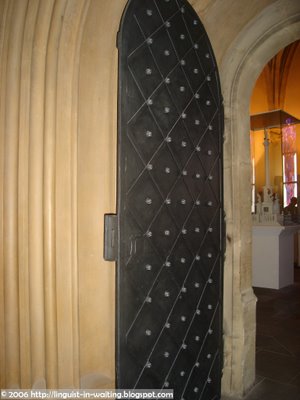 This is the door that leads to the small chapel inside the Town Hall. There is a chapel inside, so whenever the city council needed divine guidance, they have immediate access instead of walking to another church outside the hall. This part of the hall is one of the few spots that was left intact during WWII. The Nazis bombed the Old Town Hall on May 8, 1945, before they surrendered to the Allied Powers. Some parts of the hall were damaged, but a few places were still intact. 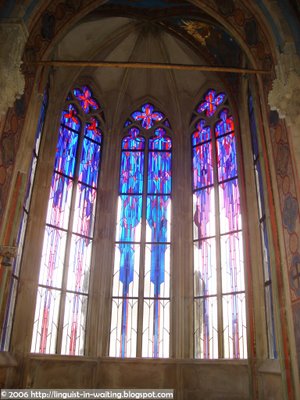 Some views of the stained glass panels within the chapel. 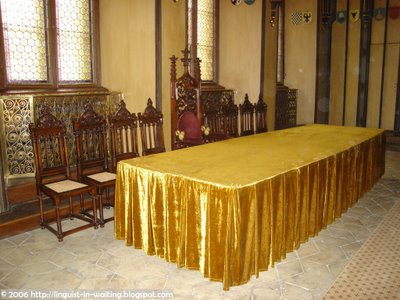 A few steps from the chapel, there is this Judgment Room. This is where the Mayor of the city and his council sits, and standing in front of this table is the defendant. This is where the court hearings are held, and on the opposite side of the room are statues of saints that stare upon the judge to ensure that he will be fair in his judgment. 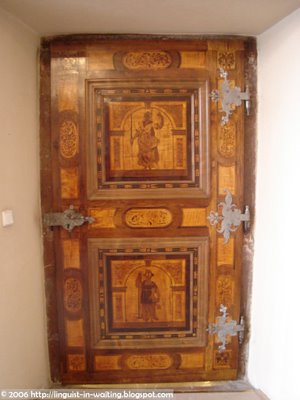 This is an original 15th century door that leads to one of the rooms in the hall. 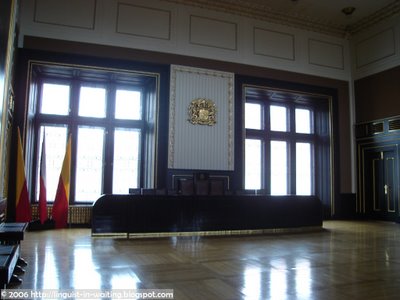 This is the Grand Room, where receptions are held. This is still used today whenever there is a special event. Paintings depicting Jan Hus and King Charles are hanging on both sides of the room. 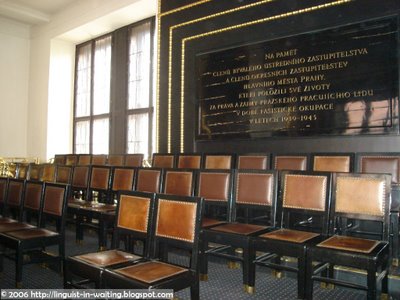 Opposite the room is this collection of seats for spectators. I have no idea what the plaque on the back says but I am guessing that it commemorates the liberation from the Fascist occupation between 1939 to 1945. 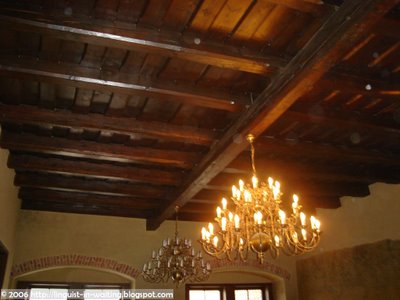 This is the ceiling of another room. This is all original wood from the 15th century. The walls are also original, as there were still Rennaissance frescoes that can be observed. 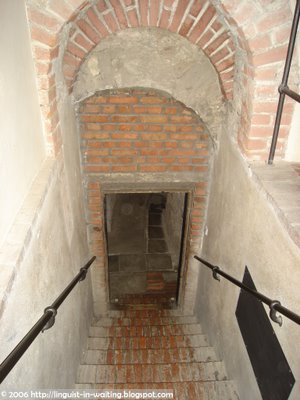 There is also a cellar underneath the Old Town Hall. This staircase leads to the cellars. 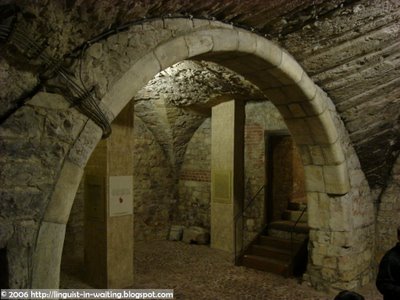 This is a shot of one of the rooms of the cellar. It used to be that this was the ground floor, but because of persistent flooding of the Vltava River, the city decided to raise the level of the city, so the ground floors became the cellars. 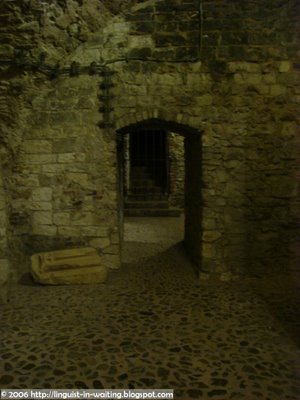 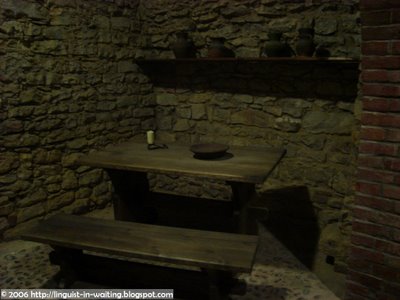 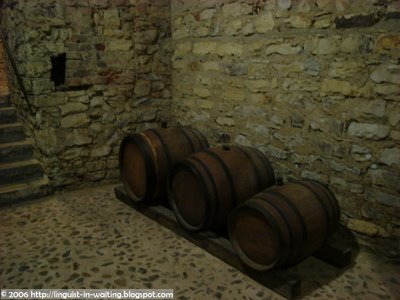 Some more shots of the cellar rooms. 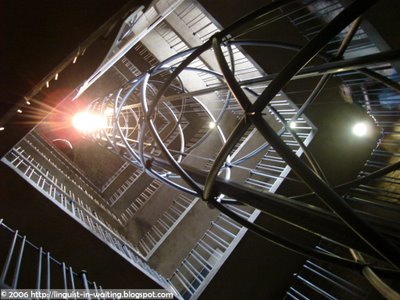 Then we went to ascend to the tower. There are two ways to get up the tower: there is the modern elevator, which will carry you up in less than a minute, or there is the traditional winding slope. Good thing it is not a staircase, but a winding incline, or else, I would be tired when I get to the top. This shot was taken from the very bottom, with the winding slope running alongside the inside walls of the tower, and the elevator at the very middle of the tower, encased by this double-helix-like metal structure. 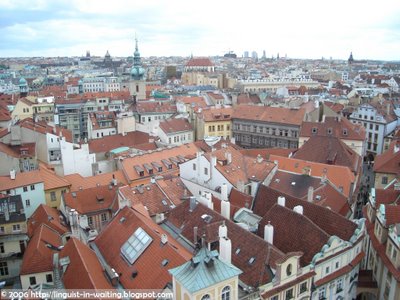 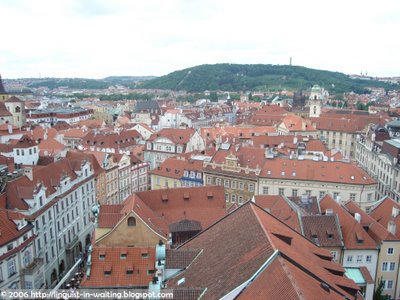 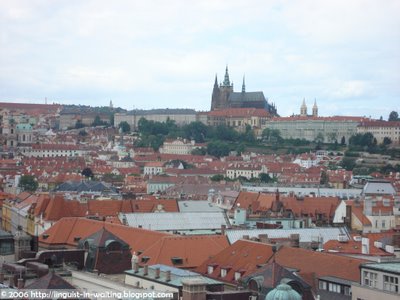 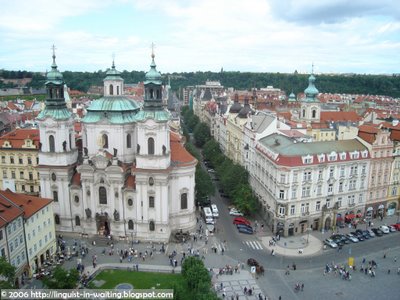 Of course, the tour would not be complete without a panoramic view of the city. These are shots of the city from the four corners of the tower.