Two days ago, I decided to go on an excursion. Given the fact that I have been here in Prague for about a month already, and I am a little bit sick by the museums, the historical buildings, the Cubist and Art Noveau yada yada, I decided to do something different. I actually decided to go outside the city and explore some different stuff. So for last Wednesday, I decided to go to Koněprusy and have a taste of caving.

Koněprusy is a village to the south of Prague, home to the longest cave system in Central Europe, which is about an hour's drive from the city center. But since I only have the public transportation as my option, I looked forward to the adventure. So instead of the usual city map and a Lonely Planet, I packed in addition to that a flashlight, a Czech Republic road and rail map, and a jacket, even though it was a raging 70-ish temperature outside. Of course, I am sane enough to not put it on and just wait for the time when I actually go inside the caves.

In order to go to Koněprusy, I needed to take the train to the nearest city, which is Beroun. So I got out of the house around 9:30 in the morning, and rode the tram to Anděl Metro Station, after which I transferred and rode the metro to the next station, Smíchovské Nádraží. From there, I got off the metro and walked to the adjacent train station, Praha-Smíchov.

Lonely Planet warned me that the staff of České Dráhy (Czech Railways) do not know how to speak English, especially for domestic legs. So I armed myself with the elementary knowledge of Czech that I have, and went up front to buy myself a ticket.

So there, I got my ticket, for 52 Kč, valid for two days, running from Praha-Smíchov to Beroun. The first train to depart leaves the station at 10:24, so I boarded that and after thirty minutes, I arrived in Beroun.

Actually, the train was ten minutes late, and I didn't understand the announcement at first, so I found a lady reading an English version of the Arabian Nights, so I asked her whether she speaks English, to which she said in the affirmative, and asked her about the announcement.

This is the interior of the train I boarded. It is an express train, so the first stop was the stop I was after. 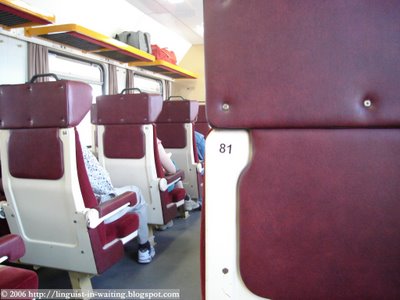 I took a few shots of the scenery as my train passed by, and good thing that my digital camera was fast enough to capture the shots. 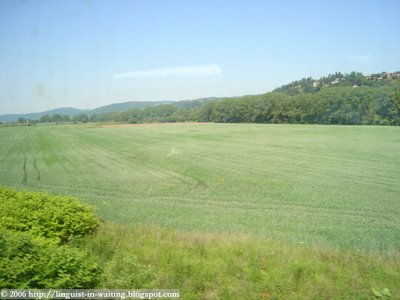 As you can see, it is the Czech countryside. 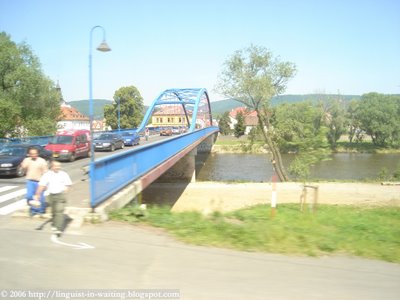 After thirty minutes, I arrived at Beroun Station. 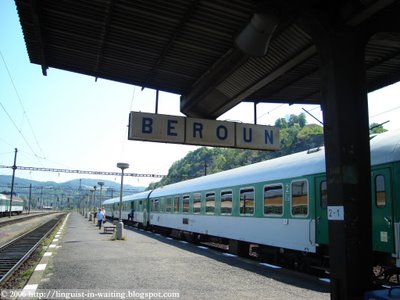 I arrived at Beroun about a few minutes after 11:00. I followed the directions of my guidebook, and I needed to find the bus stop. From Beroun, I needed to take a bus to get me to the village of Koněprusy, which is about 6 kilometers from Beroun. I walked north from the station until I reached the main square, Husovo Náměstí. 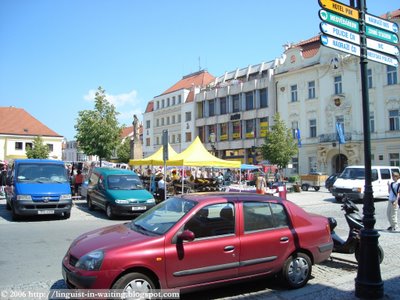 I immediately noticed that the town is very clean, but I'll talk about this later. I then found the Town Information Center, and again, with my Czech, I asked where the bus stations are.

So I found the bus stop. I then learned that the next bus does not depart until 12:20 PM, so I had around an hour to burn. So I decided to walk to the nearest store, and I bought some bread, a yoghurt drink, and a 1.5 liter bottle of water, which then became my lunch.

At 12:20, the bus arrived, and I boarded it, and 20 minutes later, I found myself at the foot of the path that would lead to the entrance.

I walked a few hundred meters from the bus stop, and then I found the cash desk. I reached the cash desk at 1:05 PM, and paid the entrance fee. They said that I could enter the caves at 1:30 PM. That is because they don't want people to crowd inside the caves. And nobody gets in without a guide. Unfortunately, the guides only speak Czech, but they provide a laminated sheet of paper explaining the caves in English. So I got that, and read the sheet before I went in, thinking that it would be dark inside and there is no time to read. That turned out to be the wise thing to do.

At 1:30, the gates opened for me. The caves are in the middle of nowhere, as this picture shows. 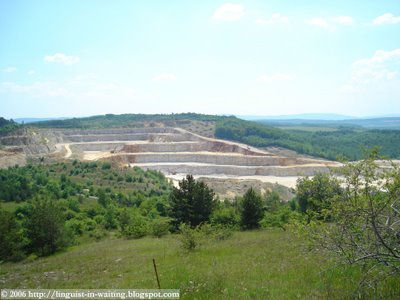 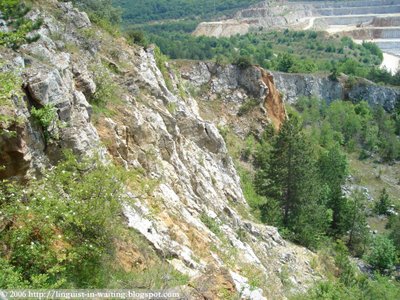 It was discovered in 1950 accidentally, because people were starting a mining quarry (thus the mining picture above), but when they hit the ravine, they discovered a cave system that happened to be the largest in Central Europe. Inside was the remains of a wholly rhinocerous, and a 15th century coin-forging laboratory. 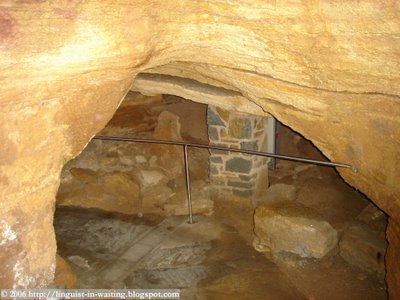 Once inside, the temperature is a constant 10 degrees Celsius, thus, I found my jacket useful. There are seven large halls inside, and we went through each one of them. 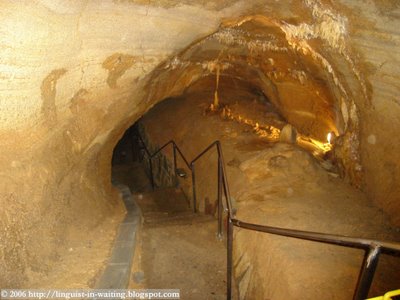 Dim lights and sidebars line the path inside the 600-meter long cave system. 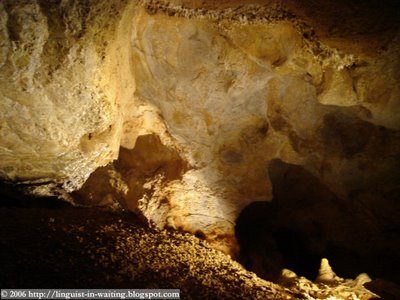 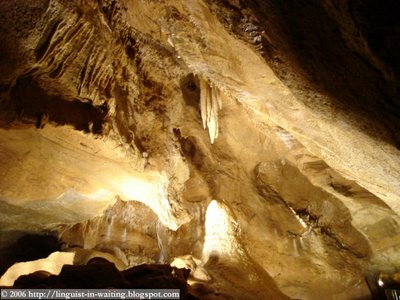 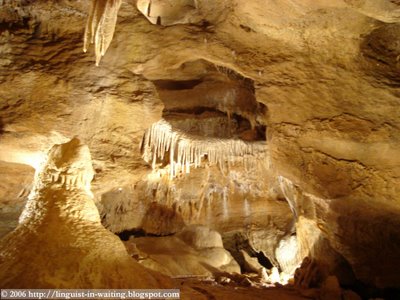 The picture above is from the Organ Hall. It is named that way because the stalactites make different sounds when tapped. Of course, in order to protect the caves, we weren't allowed to tap them. 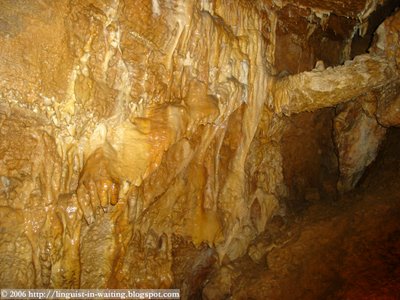 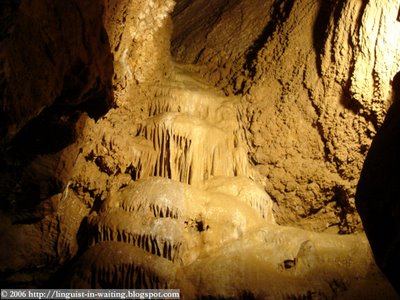 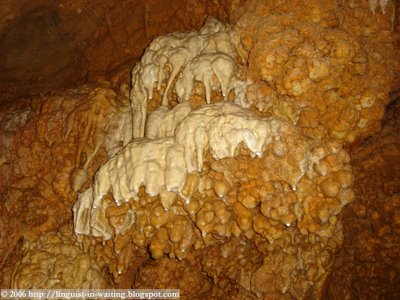 There are different formations inside, and everything was just magical. I never though I would be underneath the bowels of the earth in the middle of Bohemia. 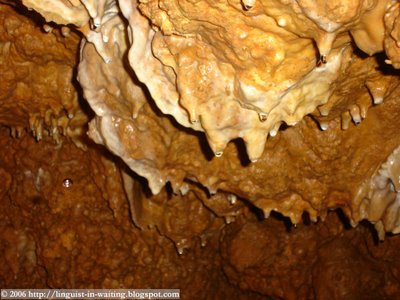 As expected, the walls and the ceilings are wet, and the stalactites are constantly dripping with liquid. 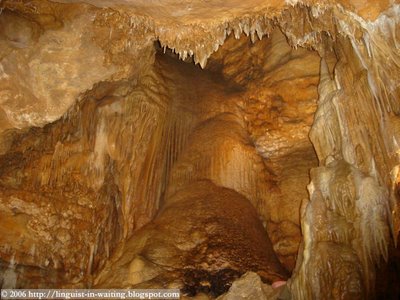 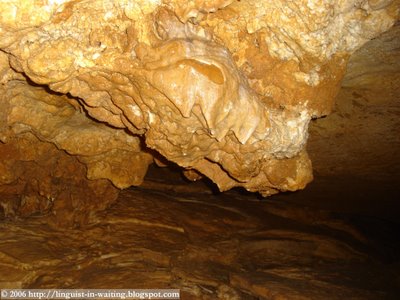 So after one hour and 600 meters of walking, I finished the tour of the largest cave system in Central Europe. Now it's time to go home.

I researched the departure times of the bus and trains long before I left home for the caves, so I knew that the next bus to depart Koněprusy for Beroun is at 3:30. And when I exited the caves, it was around 2:30. So I had an hour to waste.

I checked the souvenir shop, but there was nothing that strikes my fancy, so I didn't buy anything.

This is the picture of the surroundings, in the middle of nowhere. The sign says that I am 6 kilometers from Beroun town. 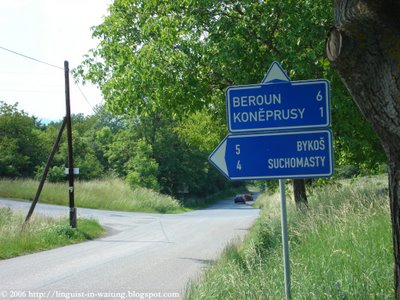 About 15 minutes before the bus came, two ladies and a toddler came close to me, and they spoke to me in Czech, apparently asking whether the bus for Beroun stops there. I told them I don't speak Czech, ironically, in Czech, but they gestured "autobus" and I tried my best to tell them that yes, buses for Beroun stop there.

So the bus came and we boarded. While in the bus, I took this picture of the Czech countryside, complete with haybales rolled up. 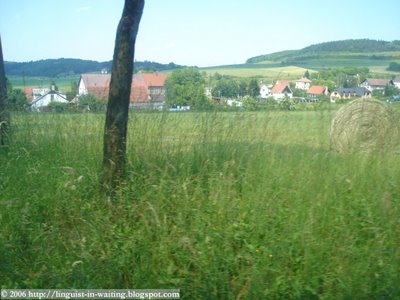 Again, after twenty minutes, I arrived in Beroun.

Like I said before, the town of Beroun is very clean. This is due to the fact that very few tourists go here. In fact, I was the only foreigner in the caves. The majority of visitors are schoolchildren on field trips in chartered buses. Notice the cleanness of the town from these few shots. 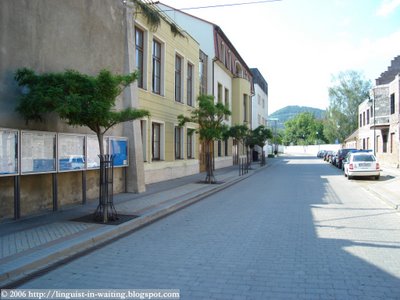 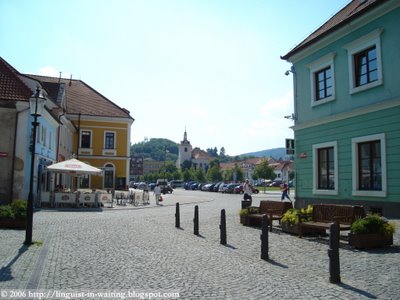 By the way, I noticed that the small flea market that was standing in the square was already put away when I arrived. How fast.

I then walked back to the train station, bought a ticket using the same routine, and boarded the first train out of Beroun, which was a local train (stopping at every stop along the way) which departs at 4:24, so I got back to Prague around ten minutes past 5:00 PM. 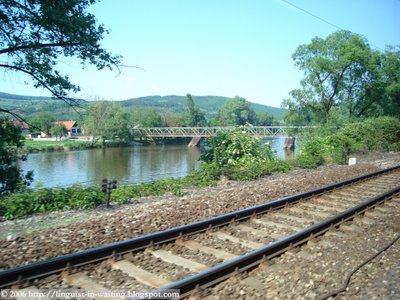 Finally, this was a shot I took of the scenery on the way back.

All in all, I enjoyed seeing the countryside, even though I cannot imagine myself living there. I loved the caves, it was my first time to be inside one. Enjoy the pictures.