News Flash! LIW has been captured after running away from the authorities for quite some time! 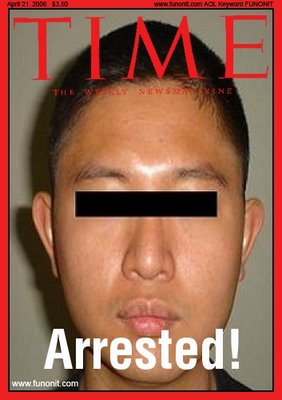 Hehe. Really, it was just my way of jumping into the bandwagon. After quite a few people I know in the blogosphere started ego-tripping, I decided to follow suit. In a Monty-Python-esque kind of way.

Looking back, I have exercised my Monty-Python-esque (I kind of like this word, I've already used it twice in this entry) sense of humor in various ways. Back in my undergraduate years, during my senior year, the graduating class was assembling a yearbook. Of course, there were the usual graduation gown shot, the formal shot, and the creative picture shot. I had a Monty-Python-esque (third time now) theme for my creative shot. I was wearing an all black outfit, just a simple sweatpants and plan black shirt, but I had a white thick rope tied around my neck. And I was standing in front of a dramatic black and yellowish background, with a sliver of light cutting through the frame. I was shot tiptoeing, and having been digitally altered later on, it looked like I was dead, hanging from the ceiling. I had to tiptoe to give the hanging effect.

Another manifestation of my Monty-Python-esque humor was my choice of souvenir from Prague. I bought a lifesize replica of a human skull made of plaster, from that Bone Church that we visited in Kutna Hora. It now graces my office table. So far, two graduate students commented on that, asking me where I got that skull.

On a separate note, I have noticed that there are some attempts by trolls in my comments section. Some anonymous commenters have posted sarcastic and mood-disruptive comments. I do not feed the trolls, hence, I will not engage in their discussion. I will not even answer their questions. I will just ignore them. Thus, that means that I would simply delete these disruptive comments. If you really disagree with what I am writing here, then at least make yourself known to me, and not post anonymously. Besides, this is my blog, go somewhere else for your dose of free speech if you think I am censoring you.

Ehem, case closed regarding that. Let me move on, aye?