Yesterday has been a day that was somewhat thoughtful, in the literal sense of the word. Really, I think I had plenty of thoughts yesterday. Let me upload them here.

First, it just occured to me how unhealthy the typical American lifestyle is. I think there is a correlation between the commonness of cars and lack of public transportation to obesity. Yesterday, I went grocery shopping after coming from school, and it seems there wasn't a time in which I wasn't seeing an obese person in my eyesight. Sorry to be politically incorrect in not using the term "horizontally challenged", but well, it's my blog.

I've seen plenty of them yesterday. In the shops, in the street. I am amazed at seeing those massive hips swiveling from left to right as they walk. Some even cannot walk without the aid of a cane or a personal electric moving seat. So the thought immediately followed that I don't want to end up that way. I guess it is a reason for me to be grateful that I walk for ten minutes from my house to the school bus stop, and that is one-way.

Yesterday was a day in which I saw some people that are not so ideal. Really, I would call them pathetic but then I bet they have their own reasons why they ended up like that. So I am witholding my rude opinions.

Aside from the obese crowd, I saw this old lady, pushing a shopping cart inside the grocery. She had her cane in the cart, and she was fumbling with her wallet. As she was fumbling, I think she forgot something so she muttered "Oh sh*t." She looked like she was about 75 or 80. Alone and shopping.

When I was in Prague, I rarely saw obese people, and rarely saw old people that looked pitiful. The old people in Prague were still active, carrying bottled water with their hands and still nimble. I wonder why the difference? What may be the cultural divide that results in these eye-opening scenes?

Anyway, that is something to ponder about.

It is something to ponder about when deciding where to settle down in the future. After I get my degree and start to find a university position, I don't think I'll find one here in the United States. Aside from the factor above, I think this country has too many enemies to be safe. I just saw the news about the UK-US airplane terror threat that was apparently foiled by British police. Apparently, UK-based terrorists wanted to blow up 10 US airliners coming from the UK.

I guess that is natural social psychology. If one is popular, then one has enemies as well. The more popular you are, the more enemies you will have. More popularity means more exposure. So I guess I'll settle down in a place that is more quiet, not too much of a player in the world scene.

Yesterday, I decided to start on something I have been looking forward to do. My 2000-piece jigsaw puzzle. The last time I did a jigsaw puzzle was 11 years ago, back in 1995. It was also a 2000-piece jigsaw puzzle, and me, my sister, and my mother did the work. I think we finished it in three months. It was a superb picture of a Japanese castle in the fall, so there were plenty of colors in the frame. It now hangs in my ex-room in my parent's house in Manila.

So, what's my new puzzle? Here is a shot. 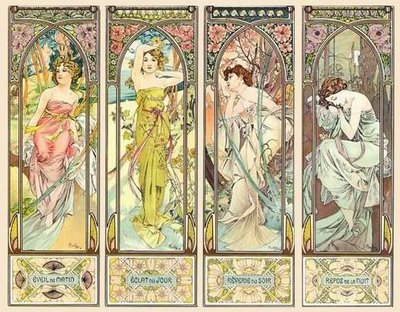 I bought this 2000-piece puzzle in Prague. This is a decorative panel by the Czech Art Noveau artist Alfons Mucha. It is albeit a little bit different from what is shown here. The bottom part with the titles are not that big, but the pictures of the four ladies are the same. What is hard about this puzzle is that the colors are so close to each other. I spent two hours just sorting the pieces yesterday. But, I am done with the base. Due to the fact that the base contained letters, I was able to finish that part yesterday. When I am done with this one, I will be framing it and I'll hang it in my room.

Final thought: it seems that I dream a lot recently. I have had very vivid dreams for the past two days. The one I had today was surreal, as with all my dreams. The first scene had me and my family in a large hall, somewhat similar to the lobby of the Czech National Museum. We were climbing the stairs, I don't know, trying to catch an opera, when suddenly my father rips off my sister's gown (Imagine what a woman in an evening gown would do to her dress should she find herself shipwrecked), so what just remained was a piece of cloth about the size of a towel. She then ran downstairs and cried so loud, that she could even be heard inside the main auditorium, louder than the soprano! Anyway, the episode changes and I found myself with my family again, in an open grassy field. We were about the eat our picnic, when the wind starts to blow, and then we see cars flying by (yes, the wind was that strong), but still our car, which we tied to a lone tree, was still on the ground. After all, it is a Toyota Landcruiser. I think it weighs more than a ton, so it was still there. But the Rover Minis and the Mazda Miatas were all blown away. Finally, we find other people, watching the cars fly by, and then I make this weird gesture and because of that, a dog behind me falls down dead, or rather, unconscious. The owner later explained to me that her dog thought that I came from a movie screen, in the same line as Sadako in the horror movie.