What was beautiful two days ago became disastrous.

So that night proved to be one of the most bizarre nights I have been through here in Buffalo.

When I left my office at around 7 PM, the wind was blowing hard and snow was raging big time. I boarded the bus and hurriedly went to my apartment.

When I reached the apartment, I realized beforehand that the electricity was out from some of the neighborhoods, and my street was no exception. And the bad thing was that I didn't have any candles in the house, and I live in a basement apartment.

So I called a friend who lives at the next street. They invited me to spend the night there, which I did. So I just passed by my house, and I have seen the damage that was done by the snow. The tree in the front of my house was totally down, blocking the garage and the car in it from moving anywhere. This was a totally unexpected snow, given the fact that the trees still had their leaves in the branches, and the sap is still in the trunks, when the snow fell on them, the heavy weight of the snow just forced the trees to break into pieces, destroying plenty of powerlines, thus the loss of electricity.

So I went to my friend's house, and they made room for me. They didn't have electricity either, but they shared what they have, to which I am grateful. Now I know why many of the Acknowledgments sections of the dissertations from my department had a line or two about "Thanks for John Doe and Jane Doe for taking care of me during the harsh Buffalo winter." So we shared the candles, I slept in their futon on the living room, and we played board games while the storm raged and the day after.

The next day, which was Friday, which happened to be the 13th, the snow stopped, but nobody was going nowhere. Almost 20 inches of snow fell in the city, and there is still no electricity. At least there is hot water in my friend's house and in my house. So I went back to my house, got a shower, ate some food, and went back to them, killing time. That night, I slept again in the living room.

Day 3, which is Saturday, also known as today. I called the university, and still, the university is closed. They cancelled the classes for Friday, and also today, all services are closed, like libraries and everything. But the good thing is that there is power in the buildings.

So I packed up, went to my apartment first to take a shower, and I went to my office, bringing with me some extra clothes and other supplies. I'd rather crash in my office which is heated than endure the cold in my apartment, which until now has no power.

Which brings me to this point. At least I have Internet here.

I took some pictures to show you how it is right now. 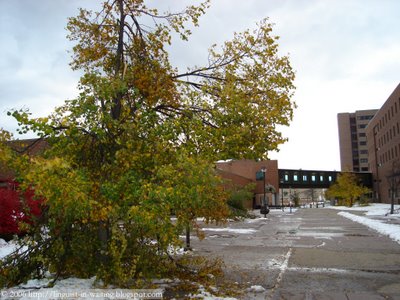 Plenty of trees fell during the night of October 12. It was a very early start for winter. Last year, it was November 16 and the leaves were all gone by then. Now, that was not the case. And the falling trees were the main reason why most parts of the city are without power. 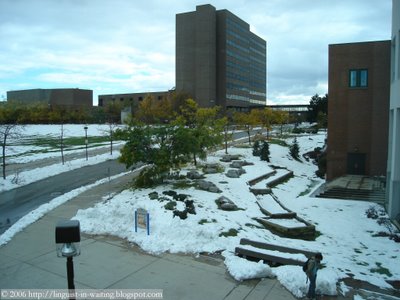 As you can see, the campus is snowed in, but fortunately, the sun shone for the following days, melting the snow. The building on the right is the Student Union, and it is now a temporary shelter for students whose off-campus housing are powerless. There is food and heat that is offered in the shelters. 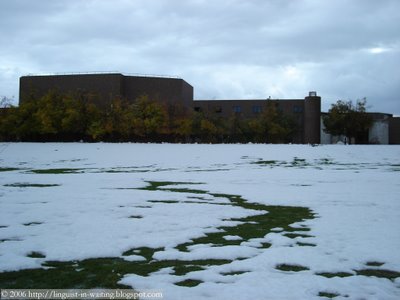 This is a vast open space that is currently covered with snow. The line of trees actually is a path that I usually take from my classroom where I teach every Monday Wednesday, and Friday, but now, most of the trees are down covering the path. 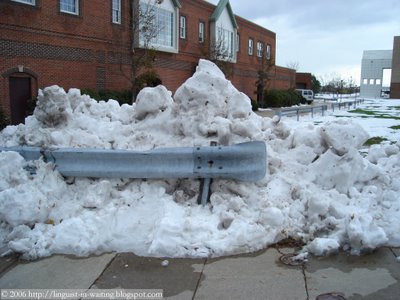 Look at the thick pack of snow piled up in the corner. All this just fell in one night. 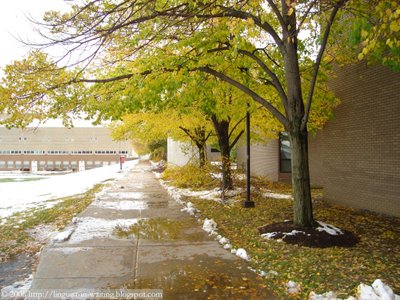 This is the path I mentioned earlier. As you can see, some trees are down, cracked because of the heavy weight of the snow that fell on top of it. 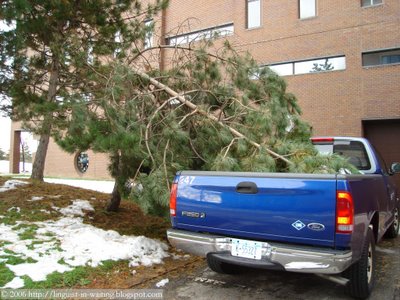 Another tree just broke into two and the top portion fell straight to the back of this truck. Some cars that were parked downtown were worse, some had their roofs crashed and the windows shattered. 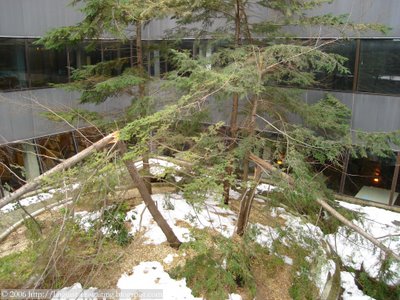 Finally, this area is the Atrium inside the Lockwood Memorial Library. The building is hollow and there are trees inside the opening, but as you can see, most are cracked.