This is due to Prab, who tagged me with this meme. Basically, this is a self-exploration exercise, introspecting on the things that happened to me ever since I started this thing, that is, blogging.

Speaking of pictures, this is another picture in my South Campus Series. Notice the tree, how the branches are broken. These are the remnants of the storm that happened last October 13. It was in the middle of Autumn, and the trees still had their leaves on them. So when the snow fell, it was heavy, and wet, and the trees gave way to the weight of the snow and crashed. Thus, I am guessing that there aren't a lot of greenery when Spring comes because of the fallen branches. 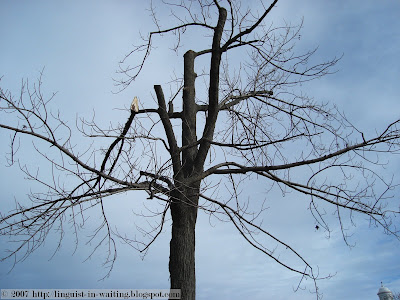