I know that it is not right to blame everything to the genes. That it is not always “nature” but rather, sometimes, it is “nurture” as well. But then, sometimes I cannot help it.

Like for the fact that I am an INTJ. It is not supposed to be an excuse for me to say that I cannot change one aspect of myself or another. But then, sometimes, it is hard not to make it an excuse.

Especially when I am a little bit frustrated in my teaching assistant class. Of course, I am just a teaching assistant, I just follow what the professor tells me to do. But I get the feeling that she is a little bit lax, a little bit on the easy side. I always have the thoughts along the lines of “If only I were the one running this class…” Because indeed, if I were the one running this class, then I would do some things differently. I’d rather not elaborate.

Now this is where being an INTJ sucks sometimes. I am not a natural born leader. I follow orders, and I am good at following them, as long as I see that the leader is competent in the job. The moment the leader fails in being a leader, I lose my respect for that person. Ok, this is not my exact point of view, rather, this is how the numerous personality analyses tell me. And to an extent, I agree. I would rather take the reins and run the show myself if the leader is doing a not-so-good job.

I am not saying that the professor is not performing well. It is just that she has a different perspective compared to me. For me, I’d pick justice over mercy 99 percent of the time, but she does the other way around. Nothing wrong with it, it’s just not my style.

Last semester, when I taught a class, one comment I received from a student (which was given anonymously over the internet) was that I wasn’t very lenient. My take on that was that I had given them enough leeway to excel in class. I had allowed them two make-up quizzes (out of 6), I allowed them to pass late homeworks (up to two weeks, but with point deductions, of course), and I gave them opportunities for extra credit at almost every homework and quiz I gave. I also gave them an extra credit assignment to turn in, in case they need one. I had all these buffers, yet they say that I am not lenient?

Somebody told me that the most likely “terror professors” are the newly hired ones, suggesting that there is a correlation between amount of teaching done and strictness. If that were true, then the graduate student instructors like me would be the most strict instructors out there. I wonder why? Are we all too optimistic that our students will perform well, that we set super-high standards?

Well, obviously, this is a sociological problem that cannot be solved overnight. I do realize that I have to learn to adopt to different people though, like adopting with my professor in this class. It is after all, her class.

Before I end this entry, let me show you another of my South Campus Series. This is still the building that houses the School of Medicine. But taken at a different angle, of course. 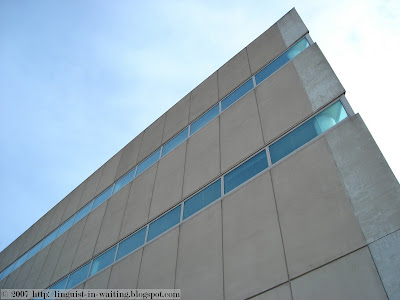