The weather really is crazy nowadays. I do not know why, but there is no snow here. Not that I am complaining, I am just meditating on the weird weather patterns.

Actually, October was worse than December. Last October, we had that thundersnow and everyone lost their power for about a week. This December, everything is balmy and sunny, although I believe that is not the case in the Rockies, where they had two blizzards so far.

Last Tuesday, I was a witness at a crime scene. I was happily walking into a supermarket, when a guy with a full beard came out rushing with a basket full of stolen DVDs. A staff was chasing after him, but to no avail. I thought that he was running because he was trying to catch a ride, but when I looked back, there was no bus. I decided to keep quiet and not volunteer myself to the police who arrived later that I am a witness, since there are plenty of other people who saw the man as well. I'd rather keep the peace.

Before I go, this is the first of my Winter Buffalo Series. A series of photos that capture the weather here. This picture shows my street in a certain morning, around 7:00 AM, after a fresh serving of snow. This was last December I believe. 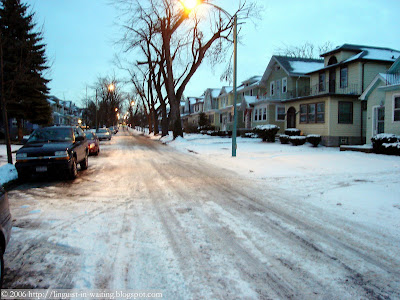