One friend of mine told me that I am an alien. It is because I seem to have the weird ability to detach myself from the human race and objectively (ehem ehem, I don't know about that) look at how humans behave.

I don't know, I just like the social sciences, and I bumped into this topic a few times in my undergraduate era, in classes like Anthropology and Sociology. It showed how different people have different value systems and how they structure their life around the things that they value the most. It also shows their belief systems and how they believe on things they think is real.

It just struck me the other day, when comparing about how different people value different things in life.

For some, it would be alcohol. Every weekend, hundreds of college students use this socially-sanctioned drug and go on to a different level. This is so evident at the Friday night buses, where everyone is screaming, totally losing their social graces. Alcohol gives people an excuse to be not themselves. This reminds me of a Japanese proverb, Tabi was haji shirazu, which when translated, means, The traveler knows no embarrassment.

For others, it would be their partner. Expressions of public affection abound on campus, I just cannot take pictures of them, since I would be violating a social norm if I do so.

Anyway, why am I making a philosophical rant here about human devotion? I don't know. Maybe because I simply observed the different students in my class, and how their performance correlates with their interest in the topic. I guess it is just nature that one will do good in something that they are interested in.

What is hard though is when someone else tells you to do something you are not interested in. Forced devotion, or fake devotion, in a way. I am reading a book about the perils the people incarcerated in the North Korean concentration camp of Yodok, and how they endured the many trials and tribulations that Kim Il-Sung and his juche regime imposed on them. Wow. The book is so strong, I sometimes have to put it down after a few pages simply because of the excruciating detail. But people survived. People who weren't swayed by the forced devotion, people who saw the light at the end of the tunnel survived.

Oh well, speaking of devotion, let me show you another picture of my Lackawanna Basilica Series. This is a black and white picture of some devotees inside the church. While a person gazes at a statue hidden from view, another devotee shows his devotion by prayer. 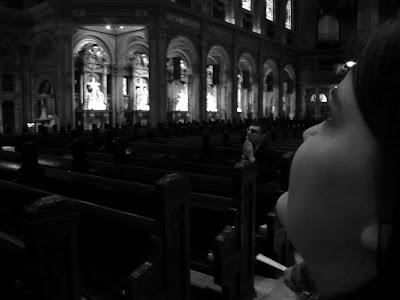