This is the time of the year when everybody in the graduate program meets the Director of Graduate Studies and discuss what courses they will take next semester. It just happens that the DGS is the same person as my adviser, so I get some more input than the regular DGS, and he is also familiar with what I do.

So I needed three classes for next Fall 2007.

I know that I need to take Field Methods 1. So I am taking it. This is actually a year-long course where a speaker of a foreign language will be in the class, and the students will elicit and try as much to know the language. Recently, the department has had a trend of using lesser-studied languages for this purpose. So, this year, it is Babanki (from Cameroon), last year as Estonian (from Estonia), the year before that was Kinyarwanda (from Rwanda). I wonder what the language that I will work on will be for next year.

So until yesterday afternoon, that was all that I had decided. I did not know what else to take. There were many options, but I don't know which one I like. I know I want to be an experimental linguist, though, which means that I am not simply into theorizing, but I want my hypotheses to be backed up by empirical data, something that is cognitively proven.

So that afternoon, while I was at the Linguistics Lounge, I had a chat with one of my professors. She is teaching a class I am currently taking, and she basically sounded out to me that I should take her class next Fall as well. She will be teaching Psycholinguistics. Hmm. I never envisioned myself to be a psycholinguist, only an experimental linguist. But she still told me that the class will deal with experimental methods in research, in every aspect of the field of Linguistics as a whole. And she said that she will not be covering Language Acquisition (thank goodness) because that is a totally different class.

So there, I now have two. Field Methods and Psycholinguistics. I needed another one. So when I met my adviser-slash-DGS, and I told him of my experimental desires, he recommended me taking a class in Psychology. Whoa. Advanced Statistical Methods 1. This is also a methods course, it is a year-long course, coded PSY 607 and 608. I was a little hesitant. So he told me to ask around and seek opinions from people who took it and is currently doing experimental work. He gave me e-mail addresses of his former students who are currently into experimental linguistics, and so I emailed them asking whether the class was useful or not. And of course, they told me that it really is a necessity if one will be dealing with data and statistics in their research.

So ok, I emailed the professor asking for permission to take the course, since the course is a "With Permission Only" course. So I guess I will be crunching numbers for a year starting this August. I guess terms such as ANOVA, regression analysis, multi-variance, mixed-design, and whatnot are going to be part of my vocabulary from now on.

So, I guess this will equip me to understand the data, and spot the instances in which some people misuse data to support their theory in academic journals.

It is weird, and amazing, at the same time, to realize how some people (like me) value empiricism, and the endeavours in the search for truth.

Well, let me give you another one of my Lackawanna Basilica Series. This is one of the domes in the church. I wasn't too pleased with how it turned out, though. 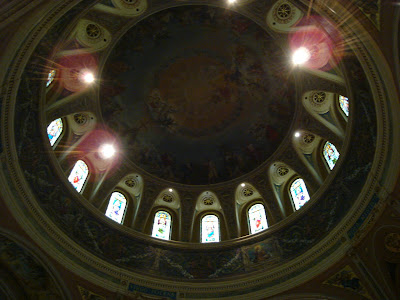