I had a couple of incomplete stuff that I wanted to complete but I don't have the power. Does that previous sentence even make sense?

Anyway. First of all, my tax returns. I brought all the necessary documents I have, like my W-2, my passport, my past tax returns, and sat down on the computer filling up the forms. Then I realized that I have a missing document, the 1042-S. Last year, I received it pretty early, so I was able to file my tax return early as well. Now, I haven't been receiving them, and I don't know if it would arrive. So I filled up the Form 1040-NREZ, and proceeded without taking into consideration the 1042-S. But, I still emailed a person from the Tax Office of the university, asking her if I am supposed to receive the form this year.

So she replied. She told me that they weren't mailed yet, and it would take about two more weeks for me to get them. And not only that, I am getting two of them. Hmmm. If only they were already mailed by now, so I can complete my tax returns. But then, I still have to wait for that document in the mail, so I have to hold my tax return.

Another one of those incomplete stuff concerns my request for approval for the experiment that I am conducting. The reviewers are sending me comments and requests for changes but one at a time. Why can't they look at the whole application and send me all the complaints and changes that I need to make, instead of sending them one at a time? This drags me, and instead of sending one revised application, with all the changes included, I am sending a revised application at a rate of one every three days. I first submitted it March 1, it is already March 12, and I haven't gotten it approved yet. This makes me grind my teeth.

So there you go, two things that I wanted finished, but still, unfinished. Like Schubert and his symphony.

One good thing that brightened my day was the fact that I learned from a friend of mine that Rob and Amber were eliminated last night from The Amazing Race. I jumped all over the corridor because of that. Hehehe.

Anyway, here is another of my Lackawanna Basilica Series. This is a picture of one of the stations inside the church. Enjoy. 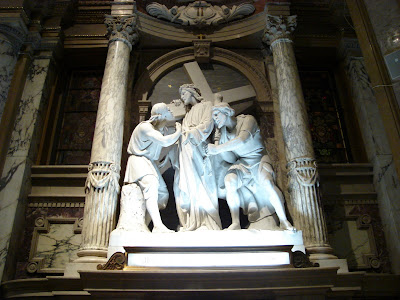