The Spring Break week is over. Next Monday, we will have classes again. So things are going to be busy again. But before that, I together with another friend of mine went on a small roadtrip. The two of us went to two places last Friday afternoon, and it was fun. We went to Old Fort Niagara and of course, the famous Niagara Falls.

My goodness, I've been here for almost two years and I haven't been to the Falls yet?

And of course, dear readers, I took photos. Niagara Falls in the winter is amazing, it looks like a downhill ski slope.

But hang on for a while, since I haven't finished posting my other photos yet, so when the current photo series runs out, I'll post these.

Let me change the topic, just a little bit. I saw this article about thousands of Americans struggling to get a passport before the peak travel season that is coming a few months from now. Now this one, I find it absurd.

For me, if one wants to go to another country, one must have a passport. Many Europeans do that, simply because of the geographical make-up of the region. There are many countries around their relatively small countries, and it is simply advisable to have a passport whenever one crosses the border.

With Americans, it is a little bit different. The USA is a vast country, and one can travel thousands of miles without crossing a border. Traveling without a passport is ok. But if one will go outside the US to the Caribbean, to Mexico, or to Canada, I would expect one to have a passport. You are crossing the border, getting out of your own country, and getting in another country. Isn't a passport the internationally-valid travel document that everyone who crosses an international border must present to the authorities?

So for a long time, Americans had the privilege of crossing borders with just a driver's license. I guess it is about time they go and follow international standards.

Speaking of international standards, the Philippine passport is also behind. If one would see the passport that a Filipino gets in Manila, the personal data is handwritten! I don't know about passports from other sources, like foreign embassies, but the one I got in New York City last year (remember this?) was machine-printed. Still, there is no biometric information! There is no horizontal code that one can just swipe it into a reader and then the information such as my name, birthday, passport expiration date, and such will be read. There is an international deadline by the ICAO that all member countries should have electronically-read passports by 2010. I hope by then I get one of those.

Oh well, this rambling is getting long. Let me present another of my Lackawanna Basilica Series. The black-and-white photo was taken behind the series of church chairs, capturing the dark hues and the light marble of the section. 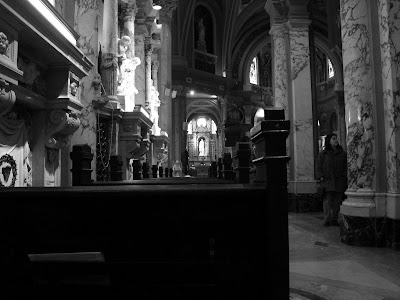