And Here We Go

Yes. I am back. I am back from the week-long vacation in Quito.

I am planning on giving a day-by-day account of my trip, and yes, I will do that. But before that, I'd say I would blog about the incidents that had happened going there and coming back. I guess the transportation aspect of it is indeed interesting, but for me, is not part of the vacation.

Oh, and with regard to photos, I will post them soon, after the current photo series finishes. I do like to have a photo included in every post of mine, so I'd rather conserve my photos rather than showcase them all at once. So at least there will be a reason for my readers to come back, so that they can see my photos.

Hey, I got that technique from A Thousand and One Nights, so in order for the king not to kill the queen, the queen tells a story where the punchline is told the next day. So, I will have a photo for every day, so you guys will come back. Hehehehe.

So, let me start my recollection of my trip.

I woke up around 4:00 AM because I called the Airport Taxi Company to pick me up from my house around 4:45 AM. I am routed Buffalo-Chicago-Miami-Quito and vice versa. My first flight for the day was departing at 7:15 AM, and so two hours are fine so that I have ample time to clear security and check-in.

The taxi arrives and the drive was smooth. No cars in the road yet. I was the second person to check-in at the American Airlines counter. I had no luggage to check in, just carry-on. The process was smooth, and so was security. I bought my breakfast in the airport (knowing that US carriers do not serve food in domestic). I arrived in Chicago at 7:45 AM local time (minus one hour for the time zone change).

My connecting flight was at 11:05 AM, heading to Miami. Now, here was where the nervousness started. It got delayed for a good one hour and a half. Good thing that I had a 3 hour lay-over in Miami, so I had ample time. I ate lunch in Chicago, and watching all these bare-metal planes take-off and land.

When I landed in Miami, I only had about 45 minutes left before my third flight departed. Good thing I had no check-in luggage, because if I had, perhaps the luggage transporters wouldn't have enough time to move it to the next plane. I hated Miami airport when connecting. It was a mess, it seemed like a huge maze where everyone had to go through these small tunnels to get from one concourse to the other. It took me 15 minutes to move from Concourse A where my flight landed to Concourse C where my flight to Quito will depart. Anyway, that was that.

They served dinner on-board the Miami to Quito flight. And I arrived in Quito around 8:30 PM. Now of all the places I have been to, Quito is the first one where English is NOT widely spoken by people. Even people who have a large interaction with foreigners like immigration officials and other airport personnel have a hard time speaking in English. I do not blame them though, I am just making an observation. When I was in European airports, for example, in Prague or in Vienna, of course, they will first talk to you in Czech or German, but when they see your passport and realize that you are a foreigner, then they try their best to speak in English. Here, it is not the case. Good thing I have a rudimentary knowledge of Spanish, and it helped me enjoy the country better.

So that was the outbound trip. The inbound trip is more interesting.

I woke up at 4:00 AM because my flight out of Quito to Miami leaves at 8:25, and I have to be at the airport 3 hours before that due to the fact that it is an international flight. So I checked out of my hotel at 5:00 AM, and they called a taxi for me to head for the airport.

At the airport, I checked in, after waiting in line for about 30 minutes. American Airlines has two departing flights out of Quito everyday, and plenty of passengers are in these flights. While in line, I got to chat with an American girl, who was in the Peace Corps. She was assigned to Ecuador one year before, and now she was heading back to North Carolina.

So 30 minutes later, I get to check-in, and this time, I do have one piece of check-in luggage. One trick with regard to going on vacation was that, one should pack one extra bag in their luggage, and this will be used to carry souvenirs later. So, in my carry-on luggage earlier, I folded in one duffel bag, a bright pink one, and I then used this as my check-in luggage later.

So, I ate breakfast in the airport, and this was my mistake. I ordered omelettes with cheese in the sole cafe in the airport, and perhaps they didn't cook the eggs well, so while in the plane, my stomach wasn't cooperating and I had to answer the call of nature. Good thing the British guy sitting at the aisle (I am sitting at the window) wasn't annoyed at my constant trips to the lavatory.

My flight departed at 8:25 AM Quito time, and four hours later, we were in Miami. I have heard stories from other people that the immigration in Miami is a mess, that officers aren't courteous but rude to the utmost degree, and that the lines are horrible, but it wasn't like that at all. It sort of neutralized my bad opinion about Miami Airport earlier. Of course, there was the long walk again, but there were no lines, and the officer was very professional. I had no trouble getting an entry stamp in my passport.

So I collected my luggage, and cleared customs. The customs officer asked me what is inside, whether I had alcohol, or whether I had any livestock or farm products. Maybe because I am coming from a South American country, and they are trying to catch traffickers of things you know what. I just told him I have a week's worth of dirty clothing from backpacking. And then he let me go.

Now, this is the crucial part. I arrived in Miami at 1:25 PM. My next flight leaves at 4:15. I had scheduled a long lay-over because I was anticipating some delays in immigration (when I came back from Prague last summer, clearing immigration in JFK Airport took me an hour and a half, one hour in the lines, 5 minutes with the officer, and the rest was spent picking up my luggage and clearing customs).

I went to the gate, and the aircraft was there, and it was on time. But then, after that, it became delayed, and they said that we would leave at 5:00 PM, 45 minutes later than scheduled. I have a 1 hour and 45 minute lay-over in Chicago to catch my last flight to Buffalo, which happens to be the last flight for the day, so I thought that I was still fine.

So they let us board, but we were sitting in the tarmac for a full hour and a half, and then an air conditioner problem came up. The airplane became so hot, and the AC malfunctioned, and after 30 minutes, it was repaired. Then came the engine problem. The left engine seems to be not working, so they pushed the aircraft a few meters from the gate (because one cannot turn the engines on, let alone test if it is working or not, if the plane is at the gate, for safety reasons), tested the engine, and we pulled back to the gate. 30 minutes later, the engine was fine again. Then, finally, 2 and a half hours after our original scheduled departure, we finally left Miami.

30 minutes before landing, the screen flashed all the connections for the passengers, and my flight was listed as "On Time". That means that it left on schedule. Still, I was hoping that they would wait for any connecting passengers, so upon touch-down, I grabbed my carry-on bags and dashed to the door. I then brisk-walked from the L Concourse of Terminal 3 to the G Concourse, which happens to be on the other side of Terminal 3.

Of course, when I got to Gate G21, where my Buffalo flight was supposed to leave from, it was already gone. The screen was showing a flight for Nashville. Not my flight. I approached the two gate agents managing the Nashville flight, and explained my situation.

So, after a few smiles, I was booked for a 1:30 PM Chicago-Buffalo flight the next day, but since that meant that I have to spend the whole morning in Chicago, I also requested that my name be put on standby for the first flight in the morning, which leaves at 8:00 AM. I also got a free one-night stay at the Crowne Plaza O'Hare in Chicago, courtesy of American Airlines. So, I took the hotel shuttle from the airport to the hotel, but before that, I ate dinner in a fast food restaurant in the airport, thinking that it would be cheaper than eating in the hotel, and I was right.

Wow. They compensate well. The funny thing is, that hotel was way better than my hotel for the past week in Quito.

So, after spending the night in the Crowne Plaza, albeit without any clothes (due to the fact that my check-in luggage had my clothes, and I cannot claim them and re-check them, and my carry-on luggage only contained my souvenirs, and I did have a poncho inside, but wearing a poncho and nothing else would merit arrest), I checked out at 5:45 AM, and caught the first airport shuttle that leaves at 6:00 AM. I was hoping to be cleared from the stand-by list, so I can arrive at Buffalo earlier, and not on the 1:00 PM flight.

So there I was in the gate. They started boarding 30 minutes before the flight leaves, and I saw all these people going in. When nobody else went in, they called my name through the PA, and said "Final Call for passenger LIW on AA 4019 service to Buffalo." So I got in, and arrived in Buffalo at 10:30 AM. That was the end of my trip.

Two days from now, I will be flying again, this time, to Manila, Philippines. Hopefully, I don't have these problems.

Hehe. Sometimes, jetsetting can be stressful as well.

I'll write about the day-by-day activities I had on subsequent posts. In the meantime, enjoy my photo series. This is another photo from my Old Fort Niagara Series. This shows the door mechanism in the fort entrance. 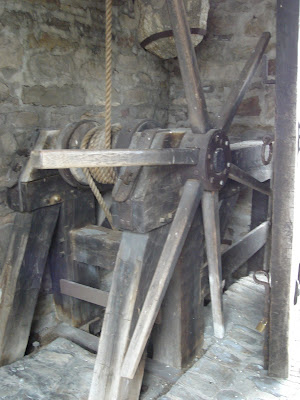