If only stress were that sexy.

I cannot believe that even if classes are over, and that I have nothing else to do for my classes, I still am stressed.

Somehow, it seems that moving into a new apartment is harder than it looks. I did two trips to the gas company already, and I am making another one tomorrow. Only to have my gas dryer installed. Hopefully, that would be the last of my worries for the house, so I can leave Buffalo next week and climb mountains in Ecuador next week with no worries.

Ecuador. Vacation. It is making my mouth water, my saliva is drooling all over the place. I am like a Pavlov dog where the mere idea of vacation is making my stomach churn and mind swirl.

Especially after watching the finale of the Amazing Race All-Stars.

My sister seems to be getting a lot of stress as well recently. And yes, I do not blame her for getting this stress, she did not want it, but still, she has to deal with it. The thing that I do not like about her attitude regarding stress is that she takes an escapological approach to the matter. If there is stress, she will escape and run away. But let me tell you, when you come back, it still is there. So better close it than just run away from it.

So, the fact that she is the last remaining member of the immediate family in the home country makes her the one that have to deal with larger family matters. The fact that a loved grandparent seems to be on the edge doesn't make it easier. I was actually appalled by my grandmother's comment to her, that my grandmother wished that my sister studied nursing instead so that she can have a personal nurse.

I guess this is a clash of traditions. I believe and I am sure that my sister also believes that birds leave their nests when they grow old. And saying that to my sister was the total opposite. Yes, the grass is greener than the other side. I do not hesitate to admit that. If the government would make some improvements and make it lucrative for its people to stay, then I will stay. But the fact that the environment is not attractive for young professionals and academics like me just persuades me and other young people like my sister to look somewhere else.

I do not hesitate to admit that I am an egoist as well. Somehow, I do not believe in altruism. Mankind is inherently evil. This has been a topic of debate between my sister and me, and most of the time, there is no defining factor which one is right or wrong. I have lost faith in politics, and if ever I would adhere to one political philosophy, I'd go for Objectivism. Thus, if the society does not make it lucrative for its citizens to stay, then they will go away.

So, I do understand how my sister feels. That she wants to leave the country as soon as possible. In fact, she is the one that has been in the Philippines for the longest time. We all arrived in 2001 as a family. Then my parents left for Europe early in 2004. And then I left for the United States in the middle of 2005. She has been there for 6 years now, and I guess she is just fed up with being the one to bear the family's coat-of-arms.

But even if she wants to leave, I am not in favor of her escapological approach. She wants to leave immediately, as in, now, if possible. If there are loose ends, then one has to tie them. Or else they'll haunt you later.

So there she was, trying to look for flights from Manila to Europe. And so she goes to me, asking for help, given the fact that I am the travel agent of the family. (I guess it is a known fact that I am the family's logistics expert. When we are traveling, I am the one holding the maps, I navigate, I lead the way, I find airline tickets and travel connections. Believe me when I say that I can find a flight from Tahiti to Timbuktu if my family needs it. That's how good I am with directions.) So she asks me questions about what flight she should take. She also asks what travel agent I used when I was in Manila.

Well, the last time I was in Manila was two years ago. I used a travel agent to buy tickets going to Taipei (for my first business trip) and to Buffalo. That was two years ago. And now she wants me to tell her what name that agency had. But it would be way easier if my father did not throw the phone directory to the garbage when he was there in Manila a few weeks ago!

Yes, the directory was a couple years old. Yes, it was outdated, since nobody was picking up a new version. But it still is better than nothing! Now my sister needs a directory in Manila and she has nothing to use. So she has to go to the phone company to fetch a copy!

I was a bit appalled by my family's persistence that I should tell what the name of the travel agency was and where it was located. I cannot remember it anymore, although I can find it in a map, if I have one. Again, I am good with directions. I am bad with names. I need the photographs of my students for a few weeks in order to tie their faces to their names. But if you ask me where it was, I can find it. So I find it odd that my mother constantly ask me these questions about the travel agency's location when just grabbing a directory is the more optimal solution.

After all, if one grabs a directory, one will get access to not just that travel agent that I used, but other travel agents as well. After all, one wants to compare price quotes right? So one can buy tickets from the most cost-efficient (an alternate to "cheap") agency.

Is pragmatism a curse?

So there I am, apparently, my trip to Manila three weeks from now is not a purely research trip. Good thing that my funding source did not ask for a day-to-day itinerary. If they did, then I would put 1) visit to grandma, 2) closing bank accounts, 3) executing powers of attorney, 4) writing wills, 5) selecting an heir, and so on, as the details.

Wow. If only stress were really a sexy temptress that would readily exchange sensual stimulation.

I really cannot wait for Ecuador.

Sometimes, I reflect on my attitude on life. I came to realize that I seem to have no hometown in the heart. Even though I do have a citizenship, that is just in paper. I don't see myself settling down in one place for a very long time. I cannot belong.

Earlier today, I was in the metro. I went downtown to run some errands. And going back, I saw the faces of the people. They were so strange. The thought then flashed right to my head, that I would never want to live in Buffalo after I graduate. And that is true, I am exercising mind over matter. I am here to study. After I accomplish my goal, I will leave.

I don't know. I feel like I am a stranger everywhere I go. Maybe that is the reason why I want to travel. I feel different everywhere, be it in Osaka in high school, in Manila in college, and even here in Buffalo in graduate school. I do not belong. I guess you could spot me in a picture right on.

I am not saying that I want to belong. I am happy with what I am. I am happy that I am unique. But then again maybe that is just a defense mechanism and I am simply fooling myself.

A couple of days back, when I was writing my paper and wanted a break, I would go online and surf the net for possible vacation destinations. Honestly, I already have an idea where my next summer destination would be, at this point. There is just a lot of places to see.

Yesterday, I had a haircut. I went to my usual salon, with the cozy waiting room. My hairstylist is a Persian woman with great striking eyes and sharp features. She owns this place, and she cuts my hair really well, that I only have my hair cut by her, because her assistants just cannot perfect the cut. Anyway, we were talking about summer, and I got to learn of her summer plans. Apparently, she is going back to Persia for summer. I asked her if Iran was a good place to visit. And she indeed answered in the affirmative. So maybe one day I will find myself roaming the streets of Shiraz. Too bad the Arg-e-Bam citadel was destroyed in 2003.

Pipe dreams, I know. But hopefully, they'll happen. Two years ago, I never imagined that I would walk atop the Acropolis and see the Parthenon in person, and climb the Areopagus Hill. But I did. Now, I wish I could walk the plaza of the Registan in Samarkand, and inhale the air surrounding the three madrassas.

Oh well, I guess that is how I manage stress. I plan for future vacations.

So, this is my second shot for my Old Fort Niagara Series. This is the first wall of the fort, and there are several. You can see the holes in the wall in the distance; there are cannons mounted on the other side. 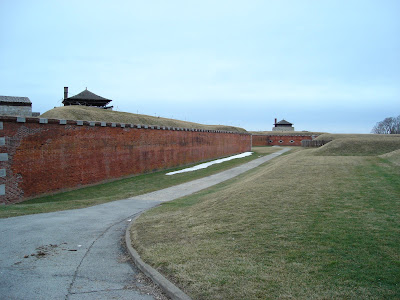