As Time Goes By

Nothing really special happened today. It's the same old routine. Not necessarily, but what I mean is that what happened today was what I wanted to happen today.

The weather here in Manila is starting to be the typical rainy weather. Rain has been a little late here apparently. Usually, the first week of June brings the monsoon rains that sometimes develop into named storms. But even now, there isn't a storm that has visited the archipelago. But starting the last couple of days, the mornings would be sunny, and after noon, the sky would be dark and cloudy, and there would be flash monsoon rains. One could wait it out, and then it would be cloudy until the evening.

I have finished the preparations for my final lecture tomorrow. Of the three lectures that I need to give here, this is the most symbolical and most mathematical of the three. Formal logic at its finest.

The dogs are reacting favorably to the new caretaker. Food is the key to everything, at least for dogs. Instinct guides them, as they say. They were noisy, but after being given food, they mellow down. Except for one. Well, that one is a monster, but can be tamed. Hopefully, the new guy succeeds.

I got some emails from my students already. Apparently quite some of them have some scheduling conflicts with my class. But still they want to take my class. Why is it that some students are like that? I know that these are sometimes unavoidable, but when it happens, sometimes it is a pain. Some students would be missing the first couple of meetings, and some students would be missing the last couple of meetings. Ugh. If they only know the amount of time I devote to preparing the class.

Anyway, I guess those are just things that are unavoidable. They have to deal with it as much as I need to.

I have three more nights here. Everything is in schedule, including my meals. It will end up having the fridge squeaky clean. Yay!

Ok, as I go, here is another shot from my Old Fort Niagara Series. I know, this is a rather huge series. This is one of the stone corridors inside the fortress. 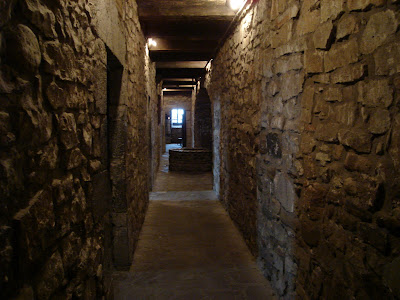