Blogging While in Transit

Ok, so this is the long day of mine where I extend a day and have a sunset and sunrise, yet the date is still the same. Well, that is due to the international date line.

Anyway, I left my folks' house at around 5:00 AM. I woke up at 3:30 AM for that. I took a shower, did my cleaning rituals, and finally closed my luggage. My ride pulled up the driveway at 10 minutes before 5:00. Then, after loading my luggage, we took off. In the car, I gave them some stuff that would be needed for maintaining the family house in Manila.

I arrived Ninoy Aquino International Airport at around 5:45 AM. I checked in my luggage, paid the travel tax and terminal fees, and after 30 minutes, was in front of my gate waiting. I ate a small breakfast, and then plugged my laptop in a socket near the Japan Airlines gate. I chatted with some of a ground staff for a while, and then proceeded to work. I read a paper written by a faculty in the department, and I wrote some of my comments down. He specifically asked for my comments so I wrote them down and will forward them at the nearest available moment. Manila doesn't have WiFi so I just had to save them.

My Japan Airlines flight to Tokyo was on time. It was uneventful, but the landing was really bad. Not for the airline, but for me. The thing is, I think I am developing a cold, and although my nose is not yet clogged, by sinus is. Thus, upon landing, my Eustachian tube is clogged and cannot equalize the pressure inside and outside my ear. Thus, I felt this jabbing pain underneath my jaw. I thought I was going deaf. It was like I lost 50% of my hearing.

So, upon touchdown in Tokyo, I looked for a drugstore. But before that, I found this WiFi station, thus, I was able to mail my comments, and also do some email correspondence. Just when the boarding process started, I decided I would go find a drugstore, which then caused me to run all over the Terminal 1 of Narita International Airport. I was one of the last ones to board my Tokyo-Chicago flight.

The long Tokyo-Chicago flight was uneventful, I did some major progress in my novel. I bought a decongestant and a nose spray in a drugstore in the airport, and I put my Japanese knowledge to use. The drugstore clerk didn't have a good command of English, so I just explained to her my problem. Good thing they accepted US Dollars as payment, or else I will end up with some Japanese Yen that I have no use for at the moment.

I landed in Chicago a few moments ago, and again, there was the sort of not-so-long line in immigration. I didn't have a problem entering the country again, although the customs person selected me for random x-ray check of my luggage. That was done in 10 seconds.

So now I am here, sitting in Chicago O'Hare International Airport, waiting for my last flight to Buffalo to depart. I have a three hour lay-over, so that's ample time. No need to stay in a hotel this time.

I was observing the passengers on my flights. I guess one can see the country's growth and development by looking at the passengers of those countries. People from the Philippines usually are there for the first time: they don't know how to look for signs, they seem lost all the time, and they ask seemingly stupid questions like "Is the immigration line in alphabetical order?" They seem to not have complete control of their situation. They also do not show the ability to follow orders: even if the people announced that people sitting in rows 50-81 are the ones only allowed to board, people who are not sitting in those rows are still standing up and falling in line to get in.

On the other hand, people from rather affluent countries travel in a different fashion as well. They bring things that usually are not necessary for a flight, but for them, are deemed necessary. Things like a vertical cushion, entertainment devises like iPods and video games, and other gadgets. They also travel with their dogs.

During my flight, I bumped into two Filipino people, both seemed to not know where they needed to go next, and depended on me as to where to connect, where to get the next boarding pass, and so on.

Ok, here is another of my Old Fort Niagara Series. I think this is the carpentry room. Enjoy, and see you in Buffalo. 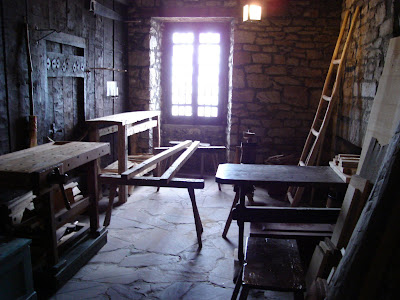