Ok. Here goes. A day-by-day description of my week-long trip to Quito, Ecuador. Starting with Day 1.

With increasing excitement, I woke up pretty early. Breakfast is served starting 7:30 AM, but due to the sounds of the street next to me, with the honking horns of the vehicles, and the ringing bells of the churches, I woke up around 6:00 AM. I then took a shower and then went out of the hotel to take a walk.

Or rather, just dig in the view at the Plaza Santo Domingo which is across my hotel. 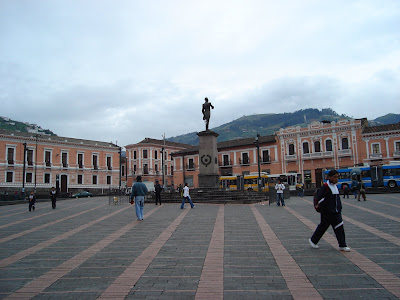 This is a picture of the plaza. This is one of the many pictures I have, but these are just posted here for teaser purposes, the full range of my photos will be shown at a later date, as a photo series.

Anyway, you can see these orange buildings surrounding the plaza. My hotel is the one directly at the corner of the plaza, behind the statue in the middle.

So anyway, I killed some time by watching people pass by, and I was amazed by the people, especially the indigenous peoples carrying impossible loads behind their backs.

When breakfast time came, I went back to my hotel, ate breakfast, and took off for the old town, also known as Centro Historico. 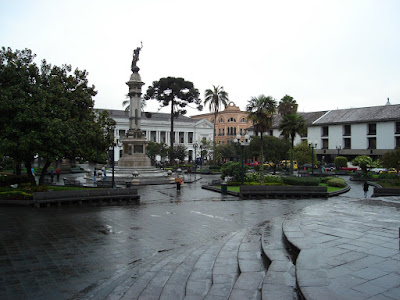 This is the middle of the area of Quito called Centro Historico, or old town. This plaza is called Plaza Grande. One side of the plaza is bordered by the Presidential Palace, and the other by the Cathedral. Another side is bordered by the Palacio Arzobispal, and another by a shopping area. It just rained so everything seemed wet.

I took a stroll and took plenty of pictures. And then, I went into the churches that dominate the old town of Quito.

The first one I went in was the Church of El Sagrario. There was a mass that was going on inside, so I wasn't able to explore much. I also took stolen shots, stolen because it seems that Ecuadorian churches forbid taking pictures in the churches, even without flash.

The second one that I visited was La Compania de Jesus. People from Ecuador claim that this is the most beautiful church in the country, and I couldn't help but agree once I was inside. Perhaps this stolen shot would prove my point. 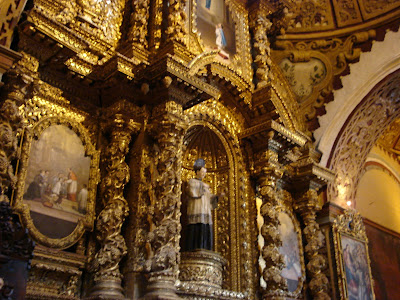 As you can see, every square inch of the church is covered with gold. This church has a major case of gold overdose. Everything inside is just glimmering with the substance.

After spending a few good minutes in this church, I went out, and I went in the Cathedral. This one is not as golden as the previous one, but the good thing about this church is that every room in this church seems to be historical. Inside the church, the coffin of Mariscal Sucre is displayed. This man is the hero of the Ecuadorian independence. Also, the place where another Ecuadorian president was killed is also marked, if I remember correctly, he was stabbed at the steps of the Cathedral, and someone carried him inside, and a few feet from the front door, he had his final breath. This was marked by a sign inside. 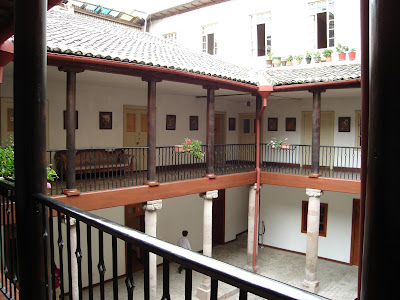 This Cathedral had a beautiful courtyard inside, and the above picture was taken from that part of the building. It seems that colonial buildings in Quito always have these beautiful courtyards that function as an oasis that protects the traveler from the noise outside.

Another building I visited was the Centro Cultural Metropolitano. This was a palace that was restored recently. During nights, this building is illuminated and creates the best view of colonial Quito at night. 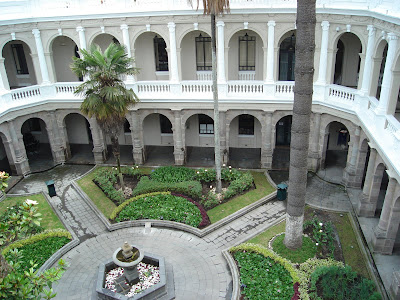 This is the picture of the courtyard, taken from the roof. The roof also gives wonderful views of the colonial skyline. This building houses a cultural library, and plenty of antique artifacts are stored here. I was able to browse old newspapers from Quito dating as old as 1883, and old books from the 17th century as well.

When I got out of the Centro Cultural Metropolitano, there was something going on in the Plaza Grande and I decided to check it out. 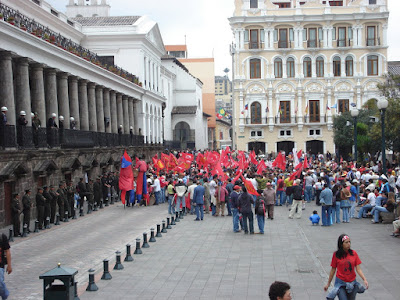 As the above picture shows, there was a political demonstration in front of the Presidential Palace. And the Ecuadorian police force are there in the front line protecting the palace. One thing that I noticed in my stay, was that Ecuador's finest is present everywhere. I guess they are making a concerted effort to keep Quito clean and safe. Which is a good thing.

After this, it was lunchtime, so I just went to a food stall somewhere, and ate a quick lunch.

After lunch, I went to Plaza San Francisco. This is the plaza that the Amazing Race All-Stars teams retrieved a clue in the middle of the night. 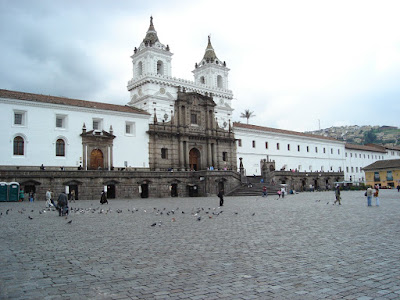 This plaza is a rather large plaza and is made with cobblestones. The Church and Monastery of San Francisco is the backdrop of this plaza. As you can see, plenty of Quito's churches have this sort of platform, where there are steps that lead to the front door. And in this platform are different small shops. Actually, I had dinner in the cafe that is housed underneath this church, called Tianguez. So I had dinner while watching people walk by the plaza. You can see this cafe on the far right, in front of the yellow building.

I spent two hours meandering inside the monastery and the church, admiring the sites. I have been walking the corridors admiring the colonial art and the architecture. I have even seen a real friar, with the brown frock and the rope around his waist! 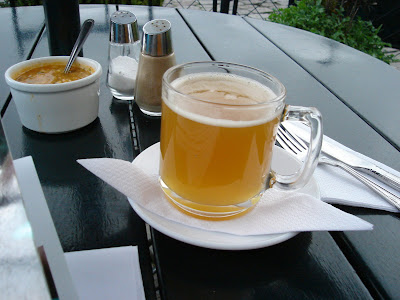 So, after that long day of admiring Quito's colonial past, I decided to eat supper in the cafe that I mentioned above. I also ordered what you see above. It is Ecuador's favorite alcoholic drink. It is called canelazo, which is a mixture of aguardiente (firewater, or alcoholic drink made from sugar cane) diluted with cider. Very strong and potent. One cup made my head reel for the rest of the night.

So there you go, that was my first day in Quito. The next day will involve places outside of the old town, but that is for another blog entry. In the meantime, enjoy the continuation of my Old Fort Niagara Series. When this is done, I will post my Quito pictures to the fullest extent in a photo series as well. 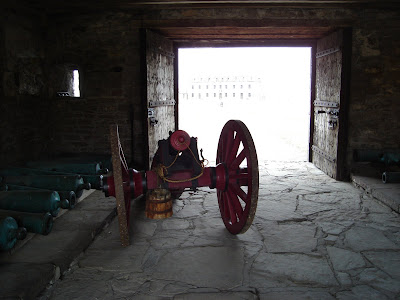