Yesterday, I gave the first lecture that I needed to give to my former university. We had an arrangement that I can use the department's students as participants for my experiments, but I had to give three lectures (or invited talks) to the department. Yesterday's was the first one. So far it turned out well.

I first thought that there wouldn't be any audience in the room except for my host and a couple of other people from the department. Let's face it, I am not a bigshot linguist (yet), and so this is no high-profile lecture.

But then it turned out that people came. Students from the department came as well. After the session they asked questions.

One reason for asking my to do the lecture series is because the department's focus within the field of Linguistics is a bit skewed. Skewed in the sense that the area that people are focusing in are not spread evenly throughout the many sub-fields of this field. The majority of people are only doing one thing. So one of the faculty members, the one who invited me, thought that it would be a great idea if I give a lecture series so that I can infuse new ideas to people, hopefully.

So I gave an introductory lecture to formal semantics. I have the lecture series set up in a way that the first lecture is a prerequisite to the second, and the second to the third. Thus, from beginner, to intermediate, to advanced.

I was afraid that it would be too technical for them, given the fact that they haven't had an idea what formal semantics is about. However, apparently, my style of lecturing was fine, and after the lecture, I asked some people whether it was easy to understand or not. Well, apparently, they got it. They said that it is funny because formal semantics at the outset seems very daunting, with plenty of symbolisms and mathematical operations. But it is just a formalism, if one understands what those formalisms mean, then they would understand it easily.

So there, that was my first invited talk. My CV will grow again.

My experiments are done. Done done done. I am now encoding the data that I got, and I need to finish them before I leave, or else I am looking at the prospect of taking a hulk of papers with me. But I think that at the rate that I am in, I will be fine.

Nothing much to talk about right now, so I guess I'll leave you with another picture from my Old Fort Niagara Series. This is a replica of 17th century life in the fort, with the herbs and spices hanging from the ceiling. 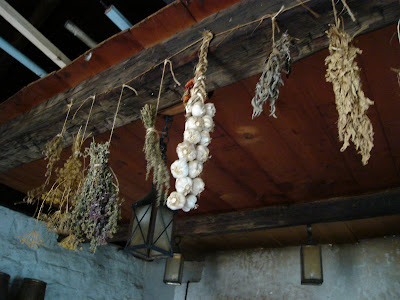