Today, I gave my second talk in the Linguistics department. It went well, as I expected. I liked the fact that the audience, which were composed mainly of university students at the junior level, understood what I was saying, since they were nodding their heads during the course of the talk.

But what is much better is that they were able to understand it even though they didn't have any encounter with formal semantics, until now.

That meant one thing; that I was able to tone it down to their level and explain it from the ground up.

For me, that is an achievement. There are plenty of people in the academe, who are bright in their respective fields, but when one layperson asks them what they are working at, they couldn't explain it to them. Too bad.

I am also having progress at my encoding of my experiment results. I only have one set left for the long version, and I have several short versions after that that I need to encode as well. At this rate, I will be done before I leave.

I have to finish preparing for the first meeting of the class that I will be teaching this summer. I haven't finished the syllabus yet. I also need to update the readings and the handouts that the students need to read. Hopefully I can do that by tomorrow, so I can upload it in the system and my students should have access to it before the class starts.

This afternoon, on my way home, I was craving for some waffle snacks. So I bought some at the stall, when some persistent street child prodded me to buy him some. I was insistent, I told him I wasn't his parent, so he shouldn't depend on me. It may be an act of a person with a heart of stone, but then, it's just like the zoo, or the national park. If one feeds the animals, then the animals will be used to being fed. Bad metaphor, I know, but then, I am a strong believer of the philosophy that you are what you make of yourself.

I brought my camera to the university this morning. The fact is, for the three and a half years that I was a student in the University of the Philippines at Diliman, I never took a photo of any of the scenery on campus. I never took a photo of the Oblation. So, I took an early bus today, so that the weather wouldn't be that hot yet, and I took photos early in the morning today.

Ah, I am getting antsy, due to the things that I still need to do. I want to pack my things already, but as it goes, I still can't. Why can't I just warp myself to the United States, instead of sitting in a metal tube for 23 hours? Oh, that would be great, but then the excitement of traveling would be gone if traveling were that easy. No more check-ins, no jetways, no take-offs and landings, no turbulence, no in-flight meals, no airplanes. Yeah, I am rambling, so I better stop. In the meantime, this is another photo of my Old Fort Niagara Series. This was the store, where the occupants traded with the Native Americans. 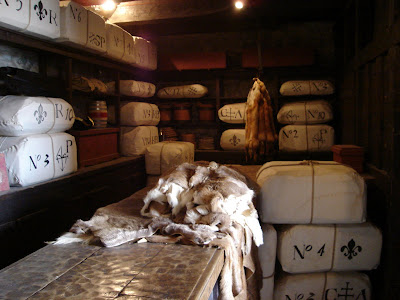