Ok. I am back. It is great to be at home again.

I touched-down in Buffalo Niagara International Airport at 9:30 PM. Unlike my previous trip to Ecuador, my flights for this one seemed to be on-time and had no problems. Except for the fact that one of my check-in luggage had its tag removed, nothing much. If I didn’t notice that the tag was gone in Chicago, then it would be lost into oblivion. Good thing I noticed it, and I had enough experience flying and connecting, so that presented no problem. After claiming it in Chicago and clearing Customs, I just went to the United Airlines ticketing counter and had it re-tagged. Problem solved.

Ok, so I had a major jetlag. I wasn’t feeling sleepy at all when I arrived, but that changed once it hit 1:00 AM. So I slept, and slept, and slept. Until 12:00 noon today. Add to that the cold that I am nursing, and the headache it is giving me. Anyway, I guess I was sort of recharged by 3:00 PM.

I met a friend, we had a very late lunch together. After that, I went to my office, and went to the classroom that I will be using starting tomorrow. I wanted to see whether I could install my laptop so as to project my laptop to the screen that is available in the room. I was able to do that, so that was fine.

I paid my bills, those that arrived while I was gone. One of them was overdue. I guess that is just the expenses that I have to shoulder because of being absent. I also hate the fact that the gas people only read the meter every other month, and instead bill you an estimated bill for the months that they didn’t come. So I get this bill for some amount, but the fact is that I wasn’t there for the whole past month! And if you don’t pay it, they will charge you with a late fee! The good thing though is that when they come the next time around, they adjust it and give your money back.

Ok, I better end this now. The following is another photo from my Old Fort Niagara Series. I know, it is getting to an end, pretty soon. And that means I have to post other photos from other series. But in the meantime, this is the rather gorgeous room of the fort's general. Compared to the bunks of the soldiers, it indeed it gorgeous. 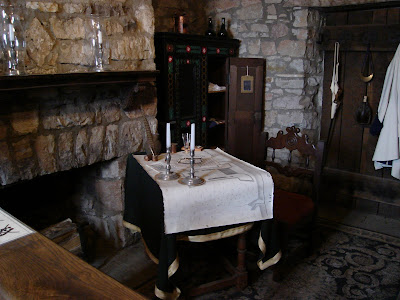