A Blister and a Sore Right Arm

I told you yesterday that I went disc golfing in the afternoon. It was fun.

There were four of us. An American guy who thinks in a European way, who happens to be a fellow graduate student; his wife, the schoolteacher; a Russian from Siberia, who has been here in Buffalo for the summer except for a few days drive in the Adirondacks with her Indian boyfriend; and me.

We decided to take a break from the summer humdrum of work and spend Sunday afternoon in Beaver Island State Park. This is a state park in Grand Island. For those who don't know, Grand Island is an island in between Ontario, Canada, and New York State. The Niagara River splits into two and Grand Island is the reason why.

So there is this 18-hole course. Just like real golf. Except that instead of hitting a stupidly-small golf ball into a stupidly-small hole in the ground, one tosses a frisbee, or rather, a disc, into a basket. And like golf, every hold is rated as to how many shots one takes to shoot. From Par 3 to Par 5.

The disc comes in many types. There are the light ones that can fly long distances. There is the mid-range one. And there is the heavy putter, which is intended to be used when one is near the basket.

It was fun, all in all. I typically had one to two shots more than the recommended par. But nobody was taking scores, so that was fine.

I ended up with a sore right arm, since I've been swinging it three or four times per hole, and there were 18 holes all in all. And I have a blister in my right foot's thumb.

Good thing I didn't lose my discs. Because there are traps as well, like water zones and shrub. But, in the end, it was a good way to burn calories.

By the way, I changed the background music to this blog again. Try to guess the language in which the song is sung.

Ok, here is another Quito at Night Series. This shows the immaculately-lit Centro Cultural Metropolitano. This was a few blocks from my hotel. I love walking on this street at night. It was very serene. 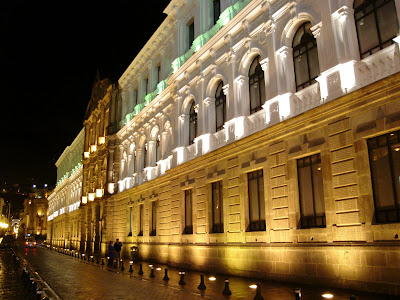