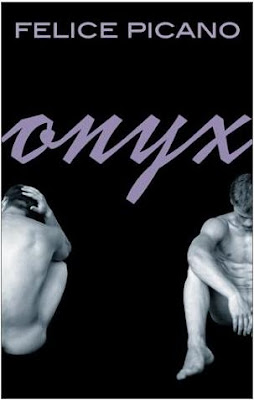 I loved the weather this morning.

I left the windows open during the night. And when I woke up, it was windy. The sky was cloudy, and the wind was flowing through the house. It was rather cool. I liked it.

Not like yesterday, when the sun was raging hard and everyone was sweating. People were stinking due to their apocrine sweat glands. Now, it was breezing, and I just had a blast.

So, I was so enveloped in my novel that I was reading, and the climax was so near I couldn't put the book down. I decided to just go straight ahead and read the remaining 100 pages of my previous book.

So I finished reading about the Cathars and the Holy Grail last night. It was an interesting read. I was glad I bought the book in Manila when I saw it in the bookstore.

So now I went to the university library and immediately in the floor where the Literature and Fiction were to be found, I picked up this current book, entitled Onyx. I just started reading the first couple pages, but apparently it is about life with AIDS.

Anyway, back to business. I met my adviser today, I needed his signature for me to get reimbursed for an award I received for my research. I also had a meeting for a conference that the graduate students are trying to organize for the Fall. We reviewed 20-something abstracts, and some were fine, some were bad. So I guess we have material for about one and a half days' worth of talks, and we are also planning to add two keynote speakers, one from our department, and another from outside. So we already had names in our heads.

So far it turned out better than what I originally thought. Because yesterday it looked bad, and some of us just wanted to cancel it. I guess some of our standards were just too high.

Here is another shot of my Quito Centro Historico Series. You can see the Ecuadorian police force, sort of protecting the palace behind them, due to the demonstrators I showed you earlier. I should say they have a rather nice uniform. They look serious, like the army. Unlike the police force of other countries, whose uniforms just make them look like security guards. 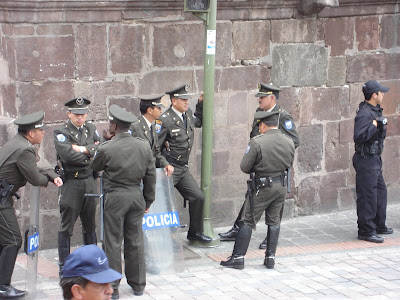