I bumped into one of my professors today in the corridor. She told me about her daughter, who happens to be a student of mine in the class that I am teaching. She told me that I seem to be succeeding into converting her daughter into majoring in Linguistics.

That was nice to hear. It was nice to hear my professor narrating to me how her daughter comes home every day telling her the different things that she learned from my class. Hopefully things stay that way.

Aside from that, nothing really interesting has been happening around here. Although there is some increase in the amount of people in the campus, nothing is really noteworthy to report.

My landlord called me yesterday night. He was asking whether I have found a roommate or not for this coming year. Apparently because if I hadn't, then he has some people that if I like, would be willing to be sharing the house with me. But I told him that I already have found a roommate, and that wouldn't be necessary.

I had a weird feeling about that call when I got it. I turned my cell off because I was teaching in class, and when I turned it on, I got his voicemail. Then I tried calling him and he wasn't answering. After thirty minutes, I tried again and finally I was able to talk to him.

It turned out that everything was fine, but during the moments after I got his voicemail and before I was able to call him, I was a little bit nervous. Was there a problem in the house? Did I forget to pay rent? Did I forget to sign the check that I mailed a couple of weeks ago? Do I have to move again?

I don't know, I was just overreacting.

But everything turned out to be well.

I just finished writing the 4th homework for my class, and I will give it to them tomorrow. I just received the 1st homework from them yesterday, and I have graded it already.

Ok, here is another Quito at Night Series. This is a toddler's view of the Church of El Sagrario. Fantastic. 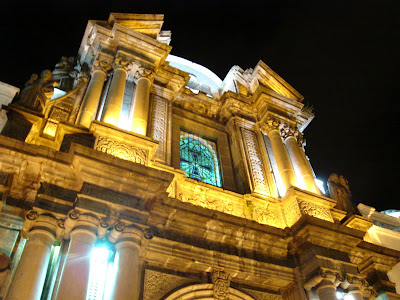