I woke up early today, due to the fact that I am helping my friend move her stuff from her old apartment to her new apartment. So, my day began at 8:30, when she drove past my house and picked me up. Out comes LIW in a rather not-so-seen outfit, sweat pants and a shirt. Haha, usually I wear something less casual than that.

So, off we went to the U-Haul shop, where we went to pick up the moving truck. We parked her car at the shop, and drove away in this big truck. It was an adventure. My friend is not so good in driving, let alone a big truck, so we were there, slowly, but surely. At least, that's good so we won't get into trouble. We then drove to Flickinger Court to pick up some furniture, and then we went to her old apartment. She already started moving some stuff the day before, so all that remains are large stuff. Thus, it was fairly quick, and the move from the old apartment to the new apartment just took one hour, not even.

Then, we went to the new apartment. We did the same routine. This time, there was an elevator, so that was good. No stairs this time. So, again, we parked the truck and moved stuff. This time, it took us about 45 minutes.

After that, we went to a gas station, filled the tank back with the amount of gas that we used, and returned the truck. Well, we actually went to the gas station three times, because we sucked at estimating the amount of gas that we used. We thought that it went to the original position, but when we parked it at the shop, it was a little less. So we went out again and filled it up again. That's weird, because sometimes it would look like it was ok at the station but when we get to the shop, it would be a little less. But anyway, after three runs to the station, we were fine.

So we dropped off the truck and drove away with her car. We then went to my apartment, and dropped off some items that she won't be using. Items such as a chair and a floor lamp. Then I took a quick 5-minute shower (since by this time I was sweating already) and changed clothes.

Then we had lunch. We had lunch at Jasmine, a Thai restaurant. It was awesome. They had the best spring rolls. Also, their Panang Chicken was unbelievable as well. And I have nothing bad to say about their Pad Thai. And guess what? I notched myself a free lunch! My friend highly opposed the idea of me paying for my bill. Ah, that's what you get for exercising by lifting a few items.

So here I am, in the afternoon, writing a homework for my class tomorrow. After the physical work comes the intellectual work.

I got a few offline messages from my sister. She was reminding me of my "gift" to her. Hehe, typical of her, impatient imbecile! By the way, nice alliteration back there. Anyway, yes, she reminded me of my promise to her, her graduation gift. Well, for all she knows, I already have set aside dinero for that.

Aside from that, she was asking when would be my next vacation. Hmmm, is she smelling something? We'll have to wait and see...

Ok, I will sign off now, but before that, here is another Ecuadorian Flora Series. Here is one of the tons of orchids in the Botanical Garden that I visited. Most of the orchids are actually Ecuadorian native species. Enjoy. 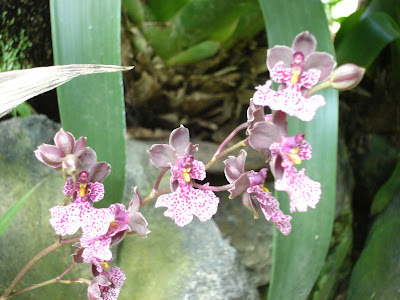