I have a pet peeve. A rather irritating pet peeve.

Why is it that people just forward messages about alleged attacks and warnings, when they themselves don't know whether the events that are detailed in these emails are true or false?

In the recent past, I received two of these alleged warnings. One was a warning to females to watch their drinks because criminals allegedly drop Rohypnol (the date-rape drug) and another drug called "Progesterex" which is a sterilization drug. A friend of mine forwarded it to me, and something inside me just ticked, and said that this is too good to be true. I thus made some research in the internet, and a few seconds later, I found out that this is just a hoax. Read this article for details.

In another occasion, I also received an email about a perfume scam, where thieves apparently let you sample cheap "perfume" that turns out to be ether. You will then pass out and they will rob you of your belongings while your lights are out. I again did research and sure enough, based on this article, this is also a hoax. With this one, apparently, there are various versions circulating around, and there even are Northern Ireland versions, New Zealand versions, and other versions out there.

Now why is it that people, when they get emails like these, have an impulse to hit the "Send to Everyone" button and forward it to everybody they know? Is it because of their concern to other people? Are they really concerned of other people's welfare?

If for example, you were approached by a good friend of yours, and gives you an unknown substance, and tells you that it is good for your health, just mix it with your water, flavored water, milk, low-fat milk, non-fat milk, coffee, decaf, cappuccino, frappuccino, latte, espresso, green tea, black tea, herbal tea, chai tea, Pepsi™, Coca-Cola™, Dr. Pepper™, or any other liquid you happen to drink, and also tells you to pass it to other people you know too, wouldn't you take a few moments to verify whether it indeed is good for you or not? Simple common sense! Again, SIMPLE COMMON SENSE! Again, SIMPLE COMMON SENSE! I cannot emphasize that enough.

The same thing goes with forwarded emails. Even if it comes from a good friend of yours (which most of the time it does), check the truth or falsity of the message. It is simple common sense, people.

Now, why do I make a big deal out of this? Maybe it is because of my nature as a scientist. Being a linguist, I try to be as empirical as possible. I test my hypotheses whether they work or not. And so, even with everyday scenarios such as these, if I get a piece of information, I test it whether it is true or not. I then proceed accordingly.

Thus, the lesson is, check it as to whether they are fact or fiction, before you spread the word.

So, time for the flowers again. Some more orchids courtesy of my Ecuadorian Flora Series. 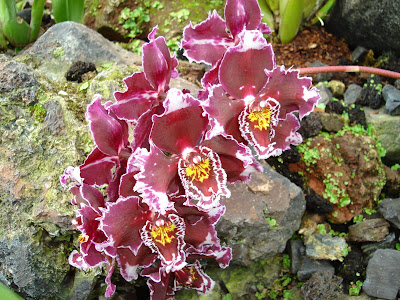