Yes, that's what happened to me yesterday. I went to school and sat in my office, and wasted my morning. But I made up for it in the afternoon.

Well, it has something to do with my love of reading. When I was little, back in Honolulu, my parents bought me a rather mediocre encyclopedia. I call it mediocre because it doesn't do justice with topics like the thicker ones, but it was well-suited for a kid at the age of 6. I read all the volumes. I didn't use it for reference, but instead, what I would do was I would pick a random volume, and open it at a random page, and start reading. I just loved knowing about new things.

So, with that in mind, yesterday morning, as I was checking my e-mail, and answering some of them, I came across some article about the Aral Sea. How it started to shrink over the decades and how it is so small compared to its original size.

Well, that's one thing that is good about the internet, one can read about plenty of information. So, one click lead to another. Where is Aral Sea? Apparently, it is located in between Kazakhstan and Uzbekistan. Wow. Can I go there? I saw the pictures of the marooned ships in a flat land, what used to be the bottom of the sea. There used to be a town that was situated on the harbor, but now, the nearest coast is 150 kilometers away. The town is called Moynaq, and by looking at the pictures, it is one of the saddest places on Earth.

So my thoughts drifted to whether I could somehow go there and visit.

Well, if some of you remember this post of mine a couple of weeks back, one of those sites are from Uzbekistan. This is one enigmatic destination for me that never fails to tantalize my being.

So, what if I go there? What would the necessary preparations consist of? I started searching airlines so that I would have an idea how much a ticket to Tashkent would cost. I looked up Tashkent Airport and saw that there are plenty of airlines that fly there, but the most reliable ones were Turkish Airlines and Aeroflot. I compared prices, given a 12-day trip, and it seems that it would be cheaper to fly via Moscow than via Istanbul. If I take the former route, a round-trip ticket from New York City to Tashkent via Moscow would cost 1140 USD, while if it is via Istanbul, then it costs 1780 USD. A rather big difference.

Ok, so via Moscow it is. Now I know that Russia usually requires a transit visa, but apparently, Belarus is the only CIS country that is considered a domestic flight in Russia. Thus, if I will be transiting thru Moscow Sheremetyevo Airport, I will never leave Terminal 2 (the International Terminal) and thus would not need a transit visa in order to fly to Uzbekistan. So that is settled.

I also need a visa. So I have to apply for one through the Consulate General of Uzbekistan in New York City. A tourist visa valid for one month costs 80 USD. And I can simply mail my application! But I have to have an endorsement from a travel agency, to prove that I am a tourist. That will come from the travel agency, so read on.

Given the fact that Uzbekistan isn't really a place in everyone's destination list, most of the time, tourists go there by package tour. I looked up a couple of tourist agencies offering tours in the country, and so far I think I found what I like the most, here. I looked at the places that they would be going and amazingly, all the UNESCO World Heritage Sites in Uzbekistan will be visited; the Historic Centre of Bukhara, the Historic Centre of Shahrisabz, the Itchan Kala in Khiva, and of course, the Registan in Samarqand. And guess what, even Moynaq, with the abandoned fishing ships in the former coast, will also be visited as well.

That's not it. I do have somewhat paranoid parents, in the sense that they think I would be kidnapped whenever I am not in North America, Europe, or some other first-world nation. Actually, they first discouraged me from going to South America a year ago because I may be kidnapped. So, I looked up the necessary numbers and addresses of who to call in case I may have problems in the country. Unsurprisingly enough, the Philippines does not maintain an embassy in Uzbekistan. The Philippine Embassy in Moscow has the oversight for Uzbek affairs. So, I made a head note about that as well.

So there you go, that's how one wastes the whole morning. Dreaming about a mysterious and enigmatic trip in the future. Don't worry, I assure my readers that I won't be embarking on this trip next May. My trip for next May already has its guidebook sitting on my table. But it isn't off my list of future destinations either.

Then, I had lunch, and realized that I needed to do some work somehow.

So, in the afternoon, I plugged in my headphones, and listened to a number of albums by Apocalyptica, a Finnish band who plays metal music using cellos. It gave me drive and was able to accomplish a lot of my encoding, transferring my data from paper to an Excel sheet.

So that's how you waste a morning and make up for it in the afternoon. And in the evening, you gather four of your friends and have dinner. We went to again, Jasmine, the Thai restaurant that I ate with a friend a couple of days ago. This time, I bumped into a former student of mine, or rather, she was a student of my professor, and I was a TA. I remembered her name, and greeted her cordially, so that she won't spit on my food. I didn't remember her to be a stellar student.

Anyway, so that was my day yesterday. Enjoy the flowers of my Ecuadorian Flora Series. There's tons more to come. 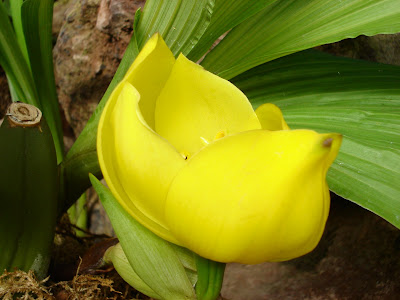