The Light Gets Brighter... Or Maybe Not

I am happy. I am happy because today is the last day of my class for the summer. Yay!

Wow. It is a weird feeling that one has the power to control another person's destiny.

Enough of that mystical tone of mine.

Yesterday, a couple of my friends and me ate out again. I know, eating out seems to be gaining its frequency nowadays, but that's just because it is the summer; everyone isn't busy doing their research and other stuff. When the semester starts, there won't be time to socialize anymore.

So, we went to this place called Taste of India on Sheridan Avenue. It was a good restaurant, and I've been there a couple of times before, but the service sometimes suck.

Like last night. I had two people with me, and they ordered Chicken Josh and Rogan Josh, both requested as mild. I on the other hand ordered Lamb Vindaloo and I requested it to be spicy. Well, they came, and we were handed our orders, but my lamb wasn't spicy at all. On the other hand, my companion's lamb was so spicy! Eventually, we figured out that everything was switched, so we fixed it.

When the waitress came and asked if everything was ok, I said, "Yeah but we were a bit confused because you switched all our orders." And she replied, "Oh I thought you guys were sharing."

If we were sharing, why is it that when we ordered in the first place, we had our own specifications as to how hot we wanted our curry to be? My companion had a bit of a mouth fire because she accidentally took a bite of my spicy vindaloo.

That wasn't all my complaints. I also noticed that she handed everything to me (a human male) first, then to my companions (two human females). So is it the case that in India, males are given priority then the females? Because everything, from the menu, to the lassis, to the pakoras, and to the curries, I was served first. It was slightly annoying from my part, but if that is the custom in India, then I'd let it pass.

Anyway, after that, we went to a bookstore, and a bought a couple of books and a calendar for 2008. I know, it is still 5 months away, but hey? I found a calendar that I would like to display in my office, so why not?

Today, I woke up only to find out that my bathroom's lighting doesn't seem to work. I already had that problem a few days before, that's why I bought a new four feet florescent lamp to replace the old one. I thought that that was the problem, but apparently not. Is it the starter? But then the unit doesn't have a starter. It doesn't have one of those battery-shaped things that one attaches to the unit. So, what I did for now is I took a floor lamp that I inherited from a friend and plugged it in, so now, instead of having hospital white lighting (which I like), I have American-style living room lighting (which I hate). If this thing continues, then I have to call my landlord and ask him to look at it.

So, there you go, my latest rant. I'll leave you with some common yellow flowers. I see these in Manila too, that's why. 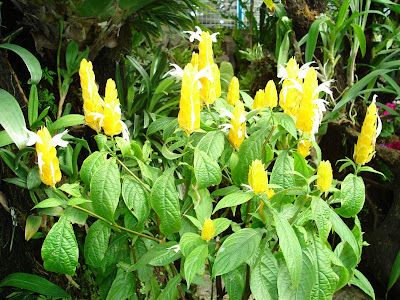