It is a remarkable fact that people try to keep track of everything they did in the past. Even this blog is a way of doing that. If I scroll over to the left hand side of this page, there is the link to the archives. And if I were nostalgic, or simply wanted to know what things happened at a specific date in the past, I simply could look it up and read what happened to me.

But then it is still ironic. Given the fact that we are equipped with a brain, which scientists say are not being used to the full at the moment, we still think that we would forget these events in our lives that we try to log them down. Take me for example: I have two histories at the left hand side of this blog. I keep track of the books I read, and I keep track of the places I've been to. Would I forget them? Possibly, possibly not.

The body heals itself. We all know that. When you were a child, and you were playing on the street, and suddenly you lose balance and trip, and you get a scratch on your knee, you temporarily have proof of the event in your body. A scar. Yet, it heals, and later on, it disappears. But, does the body still remember what happened?

It is amazing what the brain can do. I wonder if there is a prototype human that I can play with, what if a being like that exists? What if I can play with his nerve cells and connect them to different places instead of where they are supposed to be connected? Would it be funny? What if instead of hooking up the optical nerve cells to the eyes, they would be hooked up to the hands instead? So, one "sees" by touching things. The slight differences in surface sensations would produce in this prototype human different scenes, and the brain would process it accordingly.

Now that would be weird.

I guess enough of this surrealist rant. It seems that Kafka has taken the better of me. Ok, just be nostalgic for a bit, and listen to this 1985 hit. I was only three years old when this song was released. I am not a big fans of 80's music, but I like this one. Not because of the guys, but because of the orchestration. It doesn't have the typical 80's beat. But I love the way they incorporated classical music theory in the song. Very epic. Oh, and enjoy the flowers from my Ecuadorian Flora Series as well. 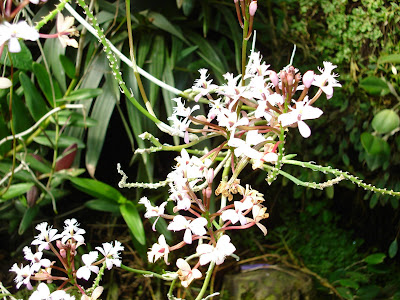