Murder on the Printing Press

Ok, so the Fall semester officially started today. I didn't have any class, but I arrived at around 9:00 AM anyway. I started my day with a long line at Starbucks. I usually don't indulge in $4.00 frappuccinos every day, I just had the urge, after seeing someone with it. But then, it took me 15 minutes to finally get my No-Whipped Cream Green Tea Frapp out of the production line. Plus, they made the mistake of putting whipped cream on it, so I asked them to fix it. Usually, they would make another one, but this time, the girl just took a large spoon and removed the dollop of cream that she put on the top. Contaminated frapp, but what can I do? It's not like it's the end of the world.

So that was that. Then I headed to the Cybrary, armed with my flash drive. I wanted to print my collection of Excel sheets that contain my data from my experiments. I got a computer, that was fast, but the printing wasn't. I waited for ages, and ages, and ages. Then, they lost the cover pages, so all those white sheets were there, floating around, and nobody knows who owns them. I recovered some of them after a few hours, but I still have some more to print.

I then attended my TA class. My adviser actually teaches the class, which is a bizarre one at this point. Here you have a native French-speaking professor, with a native Tagalog-speaking TA, conducting a class full of native English speakers. No international students. It is rare, but it happens sometimes.

Another graduate student in the department just came back from fieldwork in Indonesia. He gave me a little souvenir. He gave me a weaving from the Indonesian island of Flores. So I put it on my office table. It nicely accentuated my table so that it is not too drab and bare.

So, this is now how my office space looks like:

I have a table, facing East. A window is right next to me, facing North. This is good so it does not get hot in the mid-day, when the sun is from the south. My windowpane is graced with my two shrunken heads, Shrunken Head No. 1 (who is blonde) and Shrunken Head No. 2 (who is a brunette), both from Otavalo, Ecuador. Somehow, they remind me of Mary Kate and Ashley Olsen. I guess I have this mental image that Mary Kate and Ashley would look exactly the same if their heads were shrunk as well. Next to the heads is my magnesium statue of a nude woman from Athens, Greece. And finally, the desk clock that my parents gave to me from their trip to London, UK is at the farthest end of my windowpane. This clock was the subject of an alleged theft last year.

Then, my table has the Indonesian weaving at the very center. It acts like a nice center-piece for it. My printer is at the upper left corner. At the middle is my laptop, and behind it is my power surge protector, where my printer and my laptop is plugged. I have an Argentinian mug, courtesy of my friend from Tucuman, Argentina, which holds my assorted pens and pencils. Next to it is the skull I got from Kutna Hora, Czech Republic. Both the mug and the skull are at the upper right corner of my table. And both to the left and right of my laptop are space for any papers or other things that I might need at the moment.

Next to my table is a small filing cabinet, and on top of it, is some more space, where I put my textbooks that I use for the current semester, plus my notebooks.

Finally, the wall in front of my table contains my postcard collection that were sent to me by my family, and also the postcards that I buy whenever I go somewhere interesting. It also has a Salvador Dali calendar.

So, that's my multi-ethnic office space. I am loving it. And although today is such a hectic first day, with the library printers crashing down and everything, I am still upbeat and energetic. I guess I retained my energy, after all.

Ok, so here is the final picture from my Ecuadorian Flora Series. I myself am getting sick of seeing flowers. 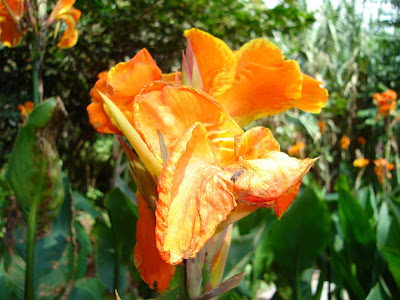