Nothing much happened today, except for some social drama, again. It seems that I get this a lot lately.

Well, it happened in my Field Methods class. The speaker was finally there, and he was from Burkina Faso. He speaks Dagara, which is a variant of Dagaare, a language found in Ghana.

So, we were eliciting words, starting from a basic word list. The professor was already asking the speaker how he says certain words and other things, and then my classmate, who is sitting next to me, suddenly very obviously takes a peek at my notes. As in, very obviously, like, everyone who sees it will no doubt recognize it as him attempting to see what I wrote.

Now, this certain classmate of mine isn’t necessarily in my social circle. He came to the program a couple of years before me, and it just happened that he is taking this class right now. We are not friends, but simply acquaintances. I know his name, he knows my name, that’s it.

Now I had a problem with what he did. In a way, it was a form of plagiarism. It was an unsolicited invasion of privacy. My notes in my notebook are private, all that is public is what is written on the board. I did not appreciate the fact that he felt like it was ok for him to stretch his neck and all its attached ligaments and see what was written in my notebook.

Of course, I did not tell him that I did not like what he did. But instead, I backed off a few inches, and instead of putting my notebook on the table, I carried it close to my chest, so he wouldn’t see it. I didn’t say a word, but still he clearly got the message I wanted to send.

I remember blogging about this earlier, but I do construct my society in different levels. I categorize people into strangers, acquaintances, friends, close friends, and lovers. If I were to give this a numerical value, a stranger would be a 0, and a lover would be a 10. The higher the number, the closer the bond is between me and that person. This scale also has a positive correlation with the amount of information we share. If I do not know anything about a certain person, and vice versa, then we are strangers to each other. If on the other hand, I know a lot of information about a person and vice versa, then most likely we are friends. Thus, the amount of information I share with someone is positively correlated to the type of relationship I share with that person. Forgive me but I do not know the standard error and standard deviation, although I know how to compute it by now. This scale also makes the inference that the more information I share with somebody, the higher the probability that I am interested in that person romantically. I do not want to say “erotically” since I believe that people can be interested in other people for simple instinctive carnal desires, propelled by the human instinct of sex and reproduction.

Anyway, I guess it is clear that the Philo-Erotic Continuum score of me and this certain classmate is rather low. If it were high, I wouldn’t mind him peeking into my notes. Of course, the higher the score, the more inclined I am into letting a person into my private space. However, as it turns out, this person scores low in my scale. Thus, I was highly offended with what he did. So hopefully, this will not happen again.

So there, another dose of social drama. I’ll go now, so enjoy my Oswaldo Guayasamin Series again with this new photo. 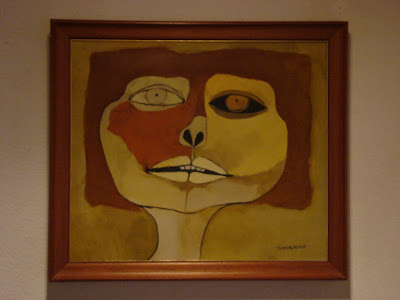