Is there such a word as "uptime"? Because, since there's downtime, there must be uptime as well, right? Or maybe I am just attempting some weird backformation.

Anyway, I am back in town. Back in Buffalo.

New York City was awesome. I had the fatalistic view that the city is too big for me to see in 5 days. So, I just took my time in seeing the sights rather than rushing myself, tiring myself, and not have fun.

So, here is the broad history of what happened.

On the night of August 10, I boarded a New York City-bound bus. It took about 6 hours to drive from Buffalo to NYC. I left at 10:30 in the evening and arrived at Port Authority in 42nd St. at 5:30 in the morning. My contact person wasn't showing up until 7:00 AM, so I killed time by having breakfast and connecting to the internet until they arrived.

I was staying at my new roommate's relatives' house in New Jersey. So, upon picking me up, we drove to New Jersey by crossing the George Washington Bridge. We then spent the morning in the movie theater. Nothing much happened on that day.

The next day, we headed to the city. We went to Lower Manhattan, ate some Chinese food, and visited Trinity Church, Wall Street, and Ground Zero.

Monday was the day when it was just me and my roommate on the streets. We were dropped off in Battery Park City, and we lined up to get tickets for the Statue of Liberty. We then went to see the lady, and then we proceeded to Ellis Island. After that, we crossed Brooklyn Bridge by foot, and did a walking tour of Brooklyn. Then, we rode the NJ Bus and went home.

Tuesday, I was alone. I rode the NJ Bus to the city, and then I went to the United Nations Headquarters and toured the complex. Then, I met with Candice, a good friend of mine. I haven't seen her in 6 years, and the last time I met with her was in Guam, at the other side of the world. Now she resides in Manhattan, and we had a great exquisite lunch together. Here are the two of us, enjoying each other's company. 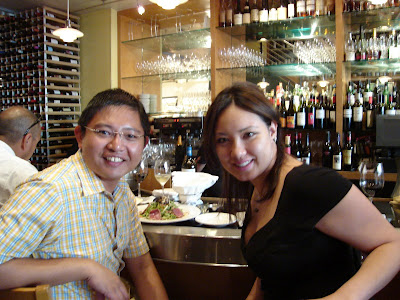 We dined at a wine bar called Morell Wine Bar. It is located in the middle of the Rockefeller Center. I had some amazing Fluke Ceviche for my first course, followed by a great sumptuous Pan-Seared Tuna for my main. This was washed down by a glass of Asyrtiko White Wine, chilled to perfection. Finally, I had the signature New York Cheesecake for dessert. She on the other hand had the gorgeous Sweet Onion Tart for a starter, and some exquisite Sliders, made with grilled lamb shanks, for the main course. This was accompanied by a full-bodied California Cavernet Souvignon. She had the heavenly Chocolate Truffles for dessert. Unfortunately, this is not a food blog, so I did not take pictures.

So, that was my lunch. After that, we parted ways, and I proceeded to the Solomon Guggenheim Museum. I also went to the Grand Central Terminal, the New York Public Library, and the Atlas Statue at the Rockefeller Center. It was again, an amazing day.

The next day, I accompanied my roommate and his aunt shopping. He is a new student so he was shopping for stocks and supplies. After that, we went to Manhattan again, and visited Times Square. It was still sunny, so it wasn't dramatic, yet. Then, we got tickets to watch a Broadway musical. We watched the longest running Broadway show, that is, The Phantom of the Opera. It was amazing, and the sets were magical. After that, we proceeded to Times Square again, and this time, it was a magical experience. All the lights, all the people, it was dizzying, to a degree, yet it was other-worldly as well. We then proceeded to the Rockefeller Center, again, and went up the Top of the Rock observation deck. It is less crowded than the Empire State Building, so we preferred this one. I took some amazing night shots of the city here. One example is the following picture. 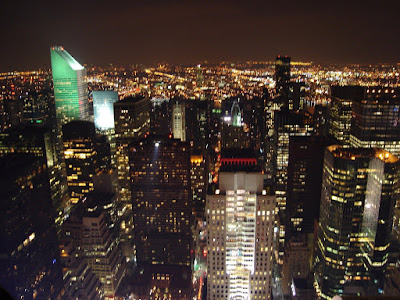 So that wraps up my first long visit to New York City. Last year, I visited NYC but just for a day, so I didn't get to see many places. All in all, NYC is an amazing city, it never fails to amaze me. I still have plenty of places that I wanted to see but couldn't, like the Museum of Modern Art, Central Park (yeah, I've walked beside it, but never really entered it), and the Dakota Building (where John Lennon was shot in 1980). So maybe, I'll visit those places next time I am in town.

Ok, here ends my post, and school will turn on again after a week, so that break was very welcome. Again, enjoy the flowers from my Ecuadorian Flora Series. 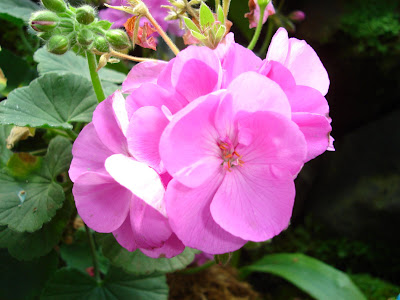