Cooking is a Science

Earlier today, I was cooking myself a pot of Hungarian Chicken Livers. I just had the craving to make this, and so the other day, I bought the ingredients and today, I made myself a pot of the stuff. It will last me about 3 days.

Anyway, that's beside the point. What hit me was that every time I make this, it comes out the same, the way I wanted it to be. The one time it didn't was when I made this in Manila, and the paprika was very much prehistoric, and I didn't want to buy a new bottle just for 2 teaspoons.

But, the good thing with cooking is that it can be replicated. Just like science. And in the case where it didn't come out right, one can thus isolate the factor that caused it, namely, the paprika.

Science is also like that. One conducts an experiment, and publishes the findings. Another scientist then comes around, and replicates the experiment. If a study cannot be replicated, then what is the value of it?

I never favored qualitative methods of research. Linguistics is interesting because it has both quantitative and qualitative aspects to it. In my Field Methods class earlier, the topic of ethics in fieldwork came up. And in one aspect, it has something to do with possessing one's field.

Apparently, there are linguists who are possessive of the field area in which they work in. Say, some linguist invests a decade of his life researching the language of the people of a certain part of the world. They would be mad and would not allow other linguists to go ahead and conduct fieldwork there independently of them.

I do not agree to this policy. My main reason is because of the issue of replication. Linguistics is supposed to be a science. How can the data be tested by replication if one linguist is monopolizing a certain area of the world? How can other people test the claims that the linguist is making if access to the data is hampered?

Indeed, there are these issues and more, when it comes to field work.

I never imagined myself to be a fieldworker. I'd rather be an experimentalist. In this way, there are numbers to crunch, studies to replicate, hypotheses to prove, and findings to publish.

Speaking of publishing findings, my adviser threw out the idea that we may be able to present my material on an upcoming conference nearby. It brings to mind what happened last year. I had the impulse to write up an abstract and submit it at a conference, but he told me to wait.

I guess the wait is over. We'll see in a few weeks. 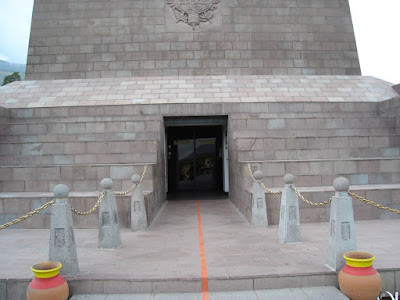 (Entrance to the equatorial monument, from my La Mitad del Mundo Series)