No big happening for today. It's the middle of the long weekend, but things are serene. Hopefully, tomorrow will be different. I know that it should be different, since I and two other friends of mine are planning to go to Watkins Glen for tomorrow. The university libraries are closed, so we cannot work anyways, so we'd just play instead.

But, they didn't seem to have ill will, so, I just coughed to get their attention. They looked back, and apparently, they were checking out the fig tree in the backyard. They introduced themselves as Louisa, and her daughter Alexa. Apparently, Louisa used to live in the house, and she actually grew up there. Her father brought the fig tree from Italy as a sampling, and they were simply curious as to how it is right now.

They came to realize that I am just a tenant, and they were saying that the fig tree should be looked after, covering it up in the winters and exposing it in the summers. She mentioned some tips in maintaining the tree, in hopes of it growing well again. As it seems, it was neglected for this year, due to the fact that nobody knew how to take care of it. My landlord didn't know how, I didn't know how.

Anybody have ideas how to grow a fig tree in a temperate climate?

Anyway, here is another picture from my Oswaldo Guayasamin Series. This painting is called El Guitarista. 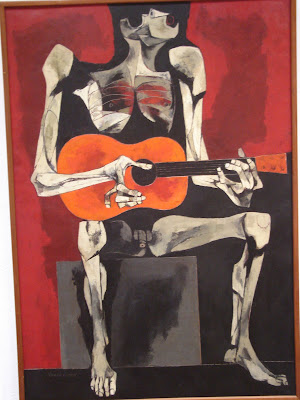