When I work, I work. When I play, I play. I usually find myself in "Work" mode most of the time, but during the few occasional times that I find myself in "Play" mode, I do it in order to enjoy myself.

This Labor Day weekend isn't a bad time to play, I suppose.

Last night, there was an event in Mojo's, which is a watering hole that is just a few blocks from my house. There was free pizza, chicken wings, and beer, courtesy of UB's Graduate Student Association. The beer was semi-ok, the pizza was stampede-provoking, but the company and the music was great. A lot of people from my department showed up.

While there, I realized how pathetic the life of a graduate student can be. One lines up like cattle for a slice (and just one slice) of pizza and two pieces of wings. Well, one cannot blame us. Most of the members of our demographic are poor, not self-funded, and so whenever an opportunity for free food comes up, one stands in line for it.

But, if I dwell on these thoughts for a long time, I'd just get depressed, so, I just let the crowd attack the first batch of pizzas, and me and my friends just waited for the second batch to come in, talking and drinking beer in the meantime.

After that, the group's plan was to go play pool and then proceed to a club downtown for dancing. But I had another plan. I went with another group of friends downtown. We went to The Tudor Lounge, which is a bar that has a karaoke machine, where one can request songs and sing on stage in front of a crowd. It was a blast.

I did not know that yesterday had an 80's theme. Some people came along dressed up in their best 80's costume, and earned a free drink for doing so. I didn't sing, given the fact that the 80's isn't my most favorite era. If it were the 90's then I'd probably find myself on stage. But singing George Michael's Careless Whisper isn't too tempting to make a fool of myself. But, the music was still good, and me and my friends danced away to the long-lost tunes of 20 years ago.

Now, on Saturday afternoon, I am here, in my office, working again. But only because I cannot work on Monday due to the fact that they are closing the libraries due to the holiday. So, instead, I have planned a little hiking trip with two of my close friends in the department, the Taiwanese girl and the Argentinian guy. We will be hitting the road on the way to Watkins Glen State Park, where it is famous for spectacular hiking trails that go above, beneath, inside, and around different waterfalls. I will definitely bring my camera and practice some aesthetic activities while hiking.

So, here goes my first entry for September, together with two photos from my Oswaldo Guayasamin Series. This is actually two photos of the mural entitled Los Manos, which is a collection of panels depicting the human hands. Each panel is entitled differently, and all the hands depict a certain human emotion to it. 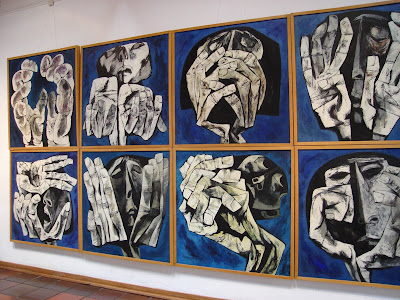 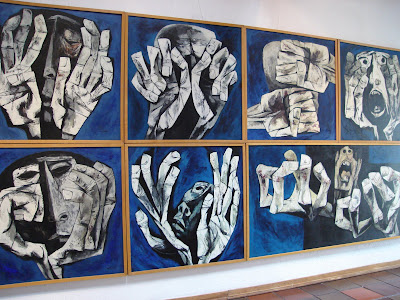