So, I'll just write a collection of happenings, both small and not-so-small, for today. Vignettes of my reality.

For one, I think I crossed the point of no-return for an upcoming endeavour. Hopefully it works out well the way I am envisioning it.

Yesterday, there was an annoying girl in the bus. She was talking on the phone but it seemed that she was talking to the whole bus. She attended the Fall Fest which apparently is an annual event here in the university, where some artists come and perform their stuff. But she said that it was getting hot, and if it gets hot she gets cranky, and then a drunk girl steps on her toes, and then she wants to have her nails done across the street from her dorm, and then she complains that her car is broken so she cannot go around, among other things. Yeah right, cry me a river. And then when it was about time to get off, the bus halted, and she stood up, and then the bus moved again, so she fell straight to me. She then shouts "Oh my god! Oh my god!" I hated the way she over-dramatizes the situation, as if she is one big diva. One thing is sure, she is a drama queen.

I sometimes observe these undergrads, and how pitiful they are. They are showered with all sorts of gadgets by their parents, making their world perverted and skewed. They think that they cannot survive life unless they have the latest iPod or cell phone. They have all sorts of technology to pamper and entertain them. Even in airplanes, they think that spending 3 hours in a metal tube sitting doing nothing is hell, and they would bring all sorts of gadgets to entertain themselves. If they want to sleep, then they would bring a neck cushion, making the ordeal bearable. I don't think they realize that there are less fortunate people out there, that would jump at the first opportunity to be even inside a plane. These people don't even consider sleeping upright a problem.

Sometimes, the world is strange.

Or I guess it has always been strange.

I need to throw away a pack of bologna from my fridge. It isn't mine; it was bought by my roommate's aunt for us. But as much as possible, I don't eat meat, and my roommate doesn't like bologna due to the fact that "there are no visible meat fibre" in it, so I guess it stayed there in the fridge until way past the expiration date. So I have to take that out and clear the fridge.

Speaking of expiration dates, the Director of Graduate Studies sent an email to certain people, me included, that the deadline for the qualifying paper is looming. I should finish the qualifying paper by the end of this academic year, and I have to make a public presentation of my research in the Colloquium within this semester. As far as I know, I am on schedule. If I do everything on time, then this requirement will be satisfied. Once that is satisfied, I will then be officially a Ph.D. candidate. And once I finish my coursework (which after this semester, I still have 7 classes to go), I will be ABD, also known as "all but dissertation".

Times flies fast. That is one realization that I always get and is mirrored by several of my blog entries. Recently it has just been the opening of the semester, and now we are already entering Week 3. And there are only 15 weeks in the semester. That means that one-fifth of the semester will be over already after this upcoming week.

Here's another installment of my Oswaldo Guayasamin Series again. This is a mural on the ceiling. The ceiling is actually open, and the sun can shine inside. Notice the way all the people are trying to reach for the light. 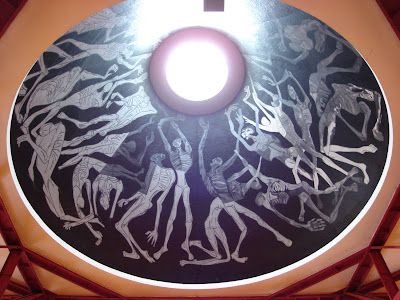