I've noticed lately that I've been blogging a lot about philosophical issues. So for today, on the last day of September, I will not be doing that.

I will just blog about random things that happened during the weekend.

I vacuumed the house earlier today. My vacuum cleaner seems to be louder than the usual. But it still is working.

I also washed two baskets of clothes and ironed or folded them yesterday. It was such a workout.

I went and had some fun in a friend's house Friday night. We played Taboo and Pictionary. It was fun describing Bruce Willis as Ashton Kutcher's wife's ex-husband.

The weather is still amazing, even though it has started to be cool from time to time.

It was raining last Friday morning, thus I decided to wear my brown poncho to school to keep me dry. The bus driver remarked that it was beautiful.

My shrunken heads seem to need an appointment at the hair salon. Shrunken Head No. 1 (the blonde) just needs a little combing, but Shrunken Head No. 2 (the brunette) needs some major tending, or else he'll look like a Rastafarian.

I found some cookies in the lounge last Friday. I took them home.

I started a subscription for National Geographic Traveler. For just 10.00 USD, I get a year-long subscription. I find their travelogues interesting. The latest issue had an article on traditional Indian weddings. It made me want to go and visit Udaipur sometime in the future. 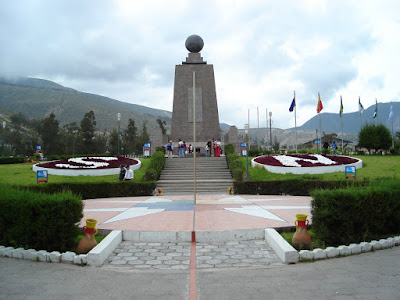 (The dividing line between North and South, from my La Mitad del Mundo Series)