"Music can name the unnameable and communicate the unknowable."

Leonard Bernstein said that. I guess he was true.

For the past two days, I seem to have an obsession for a collection of things centering around a movie I watched. Yesterday, I blogged about humankind's fascination with the idea of living forever. And now, I cannot keep my head off that topic. All because I watched Darren Aronofsky's The Fountain.

Sometimes, this happens to me whenever I watch a thought-provoking movie. The same thing happened when I watched Seven Years in Tibet a few years ago. I remember it clearly; I was in the library of my university. I had a couple of hours to spare, so I checked out the videotape for Brad Pitt's movie, and watched it in the viewing room of the main library.

2 and a half hours later, I was pensive, nearly catatonic, thinking of the themes of the movie. I never felt sad like that in the longest time.

The same thing happened to me two days ago. I watched it at night, and after that, it just propelled me into deep thought, thinking about existentialist topics like living forever, and about the fear of death and dying. Not only that, I also obtained a copy of the sound track, and I cannot get enough of it listening to my computer.

Clint Mansell, who wrote the soundtrack, did a very good job. It sends a powerful message across. The theme, the orchestration, the beats just are appropriate for the whole setting. Whenever I hear it, it always makes my blood stop and my heart skip a beat. It does sound like the soundtrack that is appropriate when one is finally at the end of one's life, facing death.

A lot of people are afraid to die, which makes most of the death-themed music frightening and harrowing, slow and deliberate. As if people wanted to delay the inevitable process. If one thinks about it, why are funeral marches written in largo? Possibly because people do not want to hurry to the grave. Because people wanted to postpone the process, trying to put it off as much as they can. Why, people spend big money just to prolong their life by an inch.

On the other hand, if one isn't afraid anymore, if one has reconciled the fact that in the end, one will die, then this movie's soundtrack is the appropriate music for that. It is the best climax one could think for a life-long journey. When everything flashes before you, until you reach the point where you are convinced that it is indeed your time to go.

I have realized that I surround myself with plenty of things that are associated with death and dying. I have a replica of a skull on my office. I have two shrunken heads from the Amazon that are displayed in my office as well. And when I graduated from college, I took a photo of myself dressed in black, with a rope tied around my neck, supposedly hanging from the ceiling, swinging and dead, since a part of my life died in a sense, when I finished my undergraduate career.

Death is the road to awe.

One of the tracks in the soundtrack had that title. Whenever I listen to that, I feel that I am split in half, that suddenly, my insides are all visible for everyone to judge, and this whole chasm of the universe suddenly drills my brain inside, bringing me to my conclusion. This piece sends multitudes of electric shocks across my spine, especially near the end, when the final bars have a fortissimo after a brief period of silence.

Music can indeed name the unnameable and communicate the unknowable. 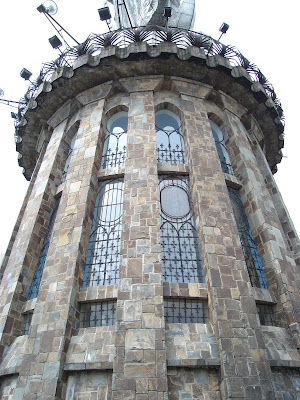 (The platform, from my La Virgen de Quito Series)