Banning a Verb Form and a Popularity of Fingerprints

A random slew of interesting stuff have been floating around the newsroom. And I'd like to write about two of them.

First concerns a weird and supposedly a first-ever attempt of outlawing a certain verb form in certain contexts. According to this news link from Bloomberg, the governor of a certain department in Brazil banned the use of the present participle from his government, because of inefficiency. The present participle is equivalent to the English -ing form, such as "looking". Thus, Brazilian politicians cannot say "We'll be taking steps." and other sentences with that verb form anymore.

I find the decision absurd. And somehow, very Big Brother-like.

I remember reading 1984 and its Newspeak, where language shapes the way people think. If the language cannot permit you to think in a certain way, then I guess people will stop thinking that way. But then this delves into the long-standing debate of language and thought, famously known as the Sapir-Whorf Hypothesis.

Another random news I want to talk about is the recent popularity of fingerprints in airports. Apparently, fingerprinting will increase, in different parts of the world, starting with the USA, Japan, and the UK. For the US, instead for fingerprinting just the two index fingers, they would want to fingerprint the whole ten fingers. Apparently, the reason is because most of the crime scenes have prints that belong to other fingers, not just the index finger. So, it would be easier to pinpoint criminals this way. Somehow, the thought that a visitor is treated as a possible criminal is quite disturbing. And for Japan, they will start to implement fingerprinting when entering the country as well. And finally, for the UK, they will use fingerprinting when people depart from the airports; they will take your prints when you check-in for your flight, and when you board the plane, they will check it again whether it matches or not. If it does, then they let you in the plane, if they don't, then they call security.

Somehow, the thought that a few years from now, I will have a microchip implanted in my right arm containing my biometric information is not surprising anymore. At least I would prefer that than traveling naked.

It seems like our world is turning into a science-fiction scenario. 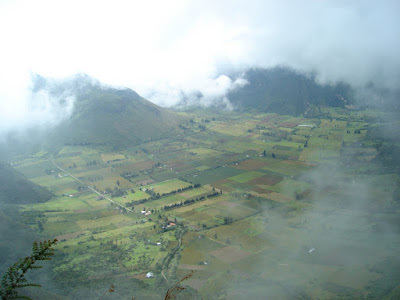 (Farming inside the crater, from my Vulcan Pululahua Series)