Yesterday, I watched the UB Symphony Orchestra's first performance of the year. It was amazing, and I was impressed.

I actually did not plan to attend this one, but since it was free, I decided to check it out. Besides, another factor which led to my attendance was the fact that I was introduced to the new orchestra director for this year, an Argentinian by the name of Christian Baldini. My Argentinian friend and I were walking through the Music Department on our way to buy tickets to a different event last week, when we bumped into Christian. And so we were introduced, and I decided to attend.

They played Ravel's orchestration of his Pavane Pour Une Infante Defunte, Mozart's Clarinet Concerto in A Major, and Beethoven's First Symphony. And for a college orchestra, the quality is superb.

The soloist in the clarinet concerto is actually a faculty of the Music Department, and she was very expressive in performing her part. She was contorting her body in accord to the music. Someone who would see her do it without hearing the music may find it funny, but in all actuality, she is just putting the right kind of emotion in the music.

The only thing that annoyed me was the decorum of the audience. Well, I couldn't expect much from a free concert. But the people were sometimes whispering, some people were going out the auditorium in the middle of performances, and some were taking flash photography. But aside from that, it was a good conclusion to the evening.

I had a meeting with the Director of Graduate Studies earlier today. I might be taking three classes from three different departments for next semester. I am not sure yet, because that might not be possible based on department rules, and so he will confirm with the Chair first. If that would be possible, then it might be an exciting Spring semester for me. But I'll update that later. In the meantime, I am beginning my countdown. And of course, I won't tell yet why I am doing this countdown. Still regardless, I have 48 days to go. 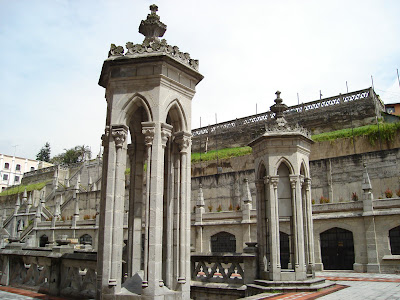 (Pillars on the outside courtyard, from my Basilica de Voto Nacional Series)