What if you could live forever?

Would you choose to live forever if you were offered the chance? Or would you rather live just up to a certain amount of time and then die, ceasing to exist?

I watched a rather philosophical movie yesterday, entitled The Fountain. It was a fantasy film about two lovers who loved each other in different periods, one from the era of the Conquistadors, where Hugh Jackman was a conquistador and Rachel Weisz was Queen Isabella. The other period was the modern-day period, where Hugh was an oncologist, and Rachel was his wife, sick with brain cancer. And finally, the other period was in the far future, where Hugh was an astronaut in a bubble-like vehicle traveling to this Nebula, which the ancient Mayans consider Xibalba.

All three periods had both of them wanting to live forever one way or the other: Tomas the conquistador searching for the tree of life in the Guatemalan jungle; Tommy Creo doing research in rhesus monkeys trying to find cure for death and dying; and the astronomer Tom traveling with the tree of life hoping that the tree wouldn't die before they reach Xibalba.

If you have someone to live for, I guess you would want to live forever. Like Tom and Izzi.

But "forever" is such a long time. 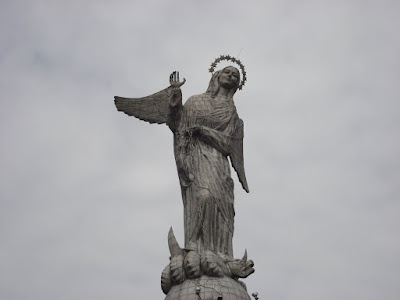 (Facing the statue, from my La Virgen de Quito Series)