I have been working on a puzzle. It depicts four women in various poses. It actually is a puzzle version of a work by Alfons Mucha. In actuality, I started it August of last year. But then things just happened, and I took a rather long hiatus.

Then last week, I decided to pull it out again of my closet and continue on it. Now, it is getting shape, about 80 percent complete. One-fourth of the panel is already complete, and I can see one of the women in her full body attire.

One of my classes, namely Field Methods, is also like a puzzle. Assuming that languages are systematic, one must just figure out the system. And I think I have a good idea of the system of the topic I am working on in Dagara, which is its tense-aspect-mood system.

Yesterday, I decided to make a metadata file for my pictures. I have quite some collection of CDs full of pictures, taken both by me and my family. And since CDs have serial numbers in them, I decided to make an Excel sheet and note what the contents are in the CDs I have, instead of sticking stickers in them which make my laptop growl.

Tonight, I am attending a tango performance with some of my friends. An Argentinian dance troupe, Tango Buenos Aires, is in town, and we bought tickets for the one-night event. Hopefully, that is enjoyable. 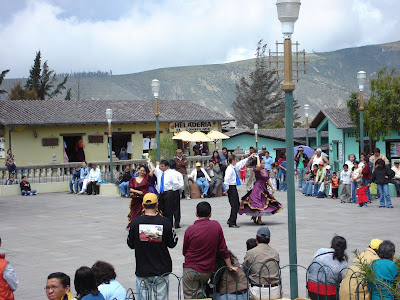 (Dancing on the middle of the world, from my La Mitad del Mundo Series)