I recently watched a rather interesting movie called Stranger than Fiction. This is about a government employee, played by Will Ferrell who suddenly hears a voice. Specifically, it is the voice of a woman, narrating his life events.

Things suddenly go awry when Will realizes that he will be killed by this narrator, Emma Thompson. So it seems that the audience should exercise an extreme case of suspension of disbelief, so that one can follow this story well. Will goes into this crazy-like phase, and then desperately tries to find this narrator so as to stop his death.

I won't tell you how the movie ended, but all in all, it was a very philosophical movie. It may be billed as a comedy, but it is indeed very philosophical when it comes to addressing the issue of whether humans have control of their lives or not. I find it that the movie is an allegory of sorts, where Will plays the average human, while Emma plays God.

Indeed, if one thinks about it, our lives are affected by a number of factors. First of all, our free will. We are relatively free to decide what to do with our lives. We ultimately choose what to wear for the day, what to eat, what to read, and what careers to choose, among other things. These exercise influence over our lives.

Another point against it is that being predestined paints a picture that is contrary to an otherwise loving god. If one were predestined to be good, and another to be bad, wouldn't that be unfair for the people?

So predestination may be wrong, but still, I believe that somehow, there is an element of control that is exerted upon us. If man is not capable of guiding oneself, then isn't that a fact that was preset long ago? That humans will fail without superhuman guidance? Does this mean that whatever we do, without divine guidance, we will fail?

I find it to be similar to a car. The maker says that this car will not run without gasoline. The car then is preset, predetermined to be like that. Humans are just the same.

So, in conclusion, human lives are carved by at least three forces, our own individual desire, the desires of others, and invisible hand of a supreme being. 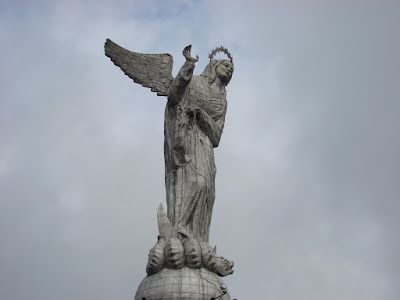 (The Virgin, standing on a serpent, from my La Virgen de Quito Series)