Today was also the first day I wore my coat again. I sent it to the dry-cleaners a month ago, and so it is ready again for one cycle of winter. I donned my black coat and together with a scarf, I set out for my office in my building. I thought that it will be a good morning.

As I was walking in the corridor in the sixth floor of my building, a few steps to the my office, I saw my adviser in the hall. He can be goofy sometimes, with a dry sense of humor to accompany it. He told me that he liked my attire for the day, and that he should also dress up like the way I do. I told him that I dress up compared to the regular college student to earn and be deserving of respect in the classroom, and he remarked that indeed, one's attire can be compared to honorifics. If one is lower down the ladder, then one uses it, but if I were the president of the university, then I don't need to dress up in order to be given respect, since my function does it for me. I guess there was truth in that statement.

So, I guess this marks the start of the winter season for me, at least. Turning the heat in the house, wearing winter clothes, among other things. A friend of mine told me that usually it snows even before October is finished. Well, there's five more days before I turn the calendar over, in case the weather was wondering. 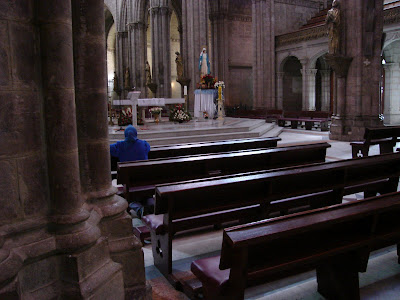 (The devout one praying, from my Basilica de Voto Nacional Series)